Science is in. For years anyone who wanted to be a chemist, doctor, work with computers, use empirical evidence to solve problems, work with the environment- all of that had been pushed aside in favor of more main streamed physical actions. Like football and hand eye coordination. However with the rise in technology that used to be reserved for science fiction in the fifties and how computers and many technologies that were once big budget devices are now household appliances, science is becoming part of the mainstream. And with that they are going to bring celebrities.

Neil deGrasse Tyson and Bill Nye have become the faces of the internet science community, in addition to just being overtly science guys. Bill Nye gained his stardom based off of his show that was played in classrooms, effectively title “Bill Nye the Science Guy” (BILL NYE THE SCIENCE GUY, BILL, BILL, BILL, BILL NYE THE SCIENCE GUY).  For a lot of us, he was the stepping stone into learning all about atoms, energy, mass, the environment- and most importantly for young kids and teenagers, he was entertaining. Tyson was a little less nostalgic for the most of the world. Only becoming the consultant for a lot of social commentary type television (The Daily Show, Colbert Report) Tyson is based in the realm of astrophysics and has worked across the country at various universities, but currently holds the title of the Fredrick P.  Rose Director at the Hayden Planetarium. Future endeavors include being the narrator to the sequel of Carl Sagan’s Cosmos: A Personal Voyage series and just being awesome. 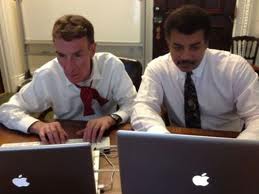 However what is surprising is the level of fame that these men are achieving. In a world where  Snooki is able to earn more money that those scientists and doctors trying to find a cure for cancer and the family problems of the Jackson’s is somehow worthy of my precious twenty minutes of television watching before work. This of course is not a bad thing- these men should be recognized for their intelligence and their love of science and ability to convey the confusing bits about atoms and particles and what makes the internet work, but it is surprising by how quickly this is happening. 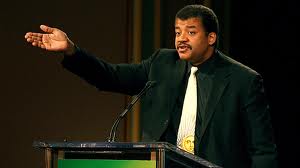 These men have seemed to become, at least among the internet community, celebrities in the blink of an eye. If you browse Reddit, Imgur, watch The Daily Show, The Colbert Report, read Cracked, venture into 4chan, you need to know who these men are.   Reddit has already had Tyson do several AMAs (Ask Me Anything), three of which are in the top ten most popular.  The two even appeared on an episode of Stargate Atlantis together. God help you if you admit to not even recognizing their names. 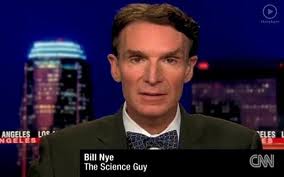 The two are the closest thing the science community has to public faces and celebrities and what is great about is the fact that they have a genuine love for these subjects- their fames comes long after their careers have been established and the fact that they know what they are talking about. What makes their fame even great is the idea that the two through a mutual emergence of fame and notoriety amongst their peers and the internet culture have created a bromance. Of which there is nothing but support for by the internet. 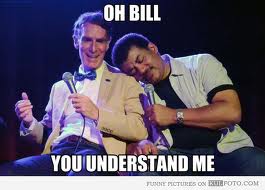 Tyson and Nye are two men who have made great accomplishments in their lives, have worked and learned and educated millions of kids in the past few decades. They’ve opened up the world of atoms and bugs and physics and potentially sent thousands of children on their current attempts to be a big old science nerds.

And it seems like they are a real life version of Turk and JD, but smarter and more emotionally mature. And with cooler jobs.