In a time of massive budgets and CGI overloads, there is a special place in science fiction for the low budget. The people behind The Drift agree. 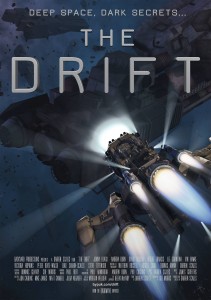 The movie is a passion project for director Darren Scales and his team of over a hundred volunteers who have been working for three years to turn out 100 minutes worth of science fiction action. “We have been making Hollywood spoof movies for 20 years, we have learned how to make spectacular looking sets and costumes with next to no budget,” said Scales. He went on, “But now we have turned that experience to make something completely new and really exciting.” And he means low budget. We’re talking $8,000 to make a movie that doesn’t look half bad. Sure it’s not lens flares á la J.J. Abrams, and thank God, but the scenes are well shot and the effects aren’t shabby. It’s a fun ride. It’s written by PAGE award winning screenwriter Sue Morris and features a crew and actors that love their art. Scales says, “Everyone involved in making the film would rather be doing this for a living, but it’s not easy to make it big in the film world. So we decided that we would make it anyway.”

The film takes place within an area of space referred to as “the Drift.” It’s a spaceship graveyard where many crafts have come to be marooned after a devastating Dark Wave damages the technology, rendering faster-than-light space travel impossible. A small vessel and its crew arrive and learn that just because things are drifting doesn’t mean they’re dead.

Made in the UK, The Drift has been covered on the BBC and ITV News and is now looking to capitalize on its success online and give something back. You can buy a DVD or download The Drift at the film’s website here where all proceeds will be donated to charity through the RAF Waddington Charities Committee.

So take a hundred minutes of your day, sit back and be entertained by those with a love of science fiction and filmmaking and support films without an astronomical budget while giving to charity. It sounds pretty good, eh?

You can check out the trailer below:

I would personally like to commend the creators of The Drift for all they’ve done. It’s a beautiful thing when people just do what they do because they love it, and not only that, but manage to somehow give to the world in the process. Thank you, you wonderful, admirable artists. Also, if you enjoyed Carly’s drifting, you can find the rest of her work right HERE on Sci-Fi Bloggers. You can also follow her on Twitter @MrsCarlyRodgers.