Risen is playable on the Xbox 360 as well as your personal computer. The game is based on an island called Faranga which is a volcanic island set in the Mediterranea. It has multiple vegetation zones and sub-climates.

There are a series of catacombs and dungeons that are to be found in the ruins of an ancient temple. Because of this, there has been an Inquisition put into effect banning anyone from leaving the city or the island itself.
The player has to choose which faction to join, Don Estebanâ€™s (bandits who formerly controlled Faranga), the Inquisition, or the Mages (under the Inquisitionâ€™s control). The goal is to regain control of the island for which ever faction you choose to be on.

Graphics in this game are outstanding. The story while a bit trite is at least engaging. The game’s sense of character and powerful atmosphere make for a truly memorable gaming experience, even if on the surface the fantasy elements may seem generic. 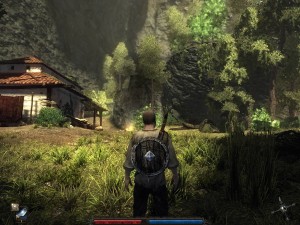 Fight system is a bit difficult on the beginning but looks very realistic later.

If you love adventuring, exploring, questing and don’t mind a challenge along the way – pick up Risen. You won’t regret it.