Riddick, the third film in the titular character’s saga, is proof positive that The Last Crusade syndrome is still in full effect. While in terms of popularity the Indiana Jones films vastly eclipse Vin Diesel’s anti-heroic trilogy, both franchises follow a similar path. The first film introduces the audience to a character and a film that most enjoyed. The second switches gears dramatically and tries to do something new, which is greeted in lukewarm fashion (although, to be fair, I love Temple of Doom). Then, when the prospect of making a third one comes around the filmmakers decide to go back to what worked in the past and turn the narrative structure of that original film into a formula of sorts. Indiana Jones did it, the Ocean’s crew did it, and now Riddick adds to this legacy. The result is an entertaining survival tale that veers dangerously close to being a mixed bag retread towards the end.

The film takes place after the events of the sci-fi extravaganza The Chronicles of Riddick. However, the events of that film are quickly eschewed by opening with our anti-hero Richard B. Riddick (Vin Diesel) left for dead on a planet that is anything but friendly. In the film’s thrilling first act, we see how great of a survivalist Riddick really is as he braves the elements alone, nurtures a killer dog as poison-tester/trusty companion and takes on slithery beasts that live in the water.

I was on such a high watching this first half hour unfold that it something of a disappointment to find that the rest of the movie didn’t hold up as well. There is a major shift that occurs at roughly the half hour point, where Riddick signals an emergency beacon once the conditions on the planet become too ominous for his liking. In response to the call, two sets of bounty hunters descend on the planet. Out of the ten or so characters that arrive, only a few of them are interesting. The rest of the movie follows a simple formula from then on, where Riddick must eventually team up with those against him to survive a greater threat; just like the original Pitch Black.

I wasn’t against them re-doing a survival tale, but to keep reminding us of that movie over and over again in the second half of this one was not a good move. The basic scenario becomes the same. Plus, there’s a character involved who has a vested interest in what exactly happened in the first movie so we are forced to hear about a certain character and events of the original almost ad nausea. It doesn’t provide a good sense of forward propulsion to the story.

The acting does what it should in a movie like this. Vin Diesel brings everything he has to the table for this movie and his opening voice-over narration before the title reveal almost had me cheering at how utterly badass it was. Katee Sackhoff is perhaps the second biggest name here (if you don’t count Karl Urban’s cameo, and Bautista) and she does pretty well despite having a character arc that feels a little problematic given her seemingly immediate predilection change upon witnessing the Furyan manliness first hand. 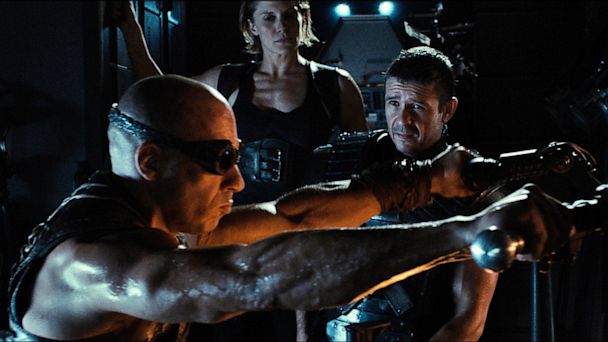 Bringing the series back to the “R” rated violence that was a mainstay of Pitch Black is a shrewd move and some of the kills are truly inventive, even when they skirt the line between improbably and ludicrously timed. The creature effects are very impressive too given the scaled down budget of the movie, but the main baddies aren’t as memorable as the creatures in Pitch Black. The dog is pretty sweet, though. I usually hate CGI companions in movies like this but it somehow works here.

Riddick works as a piece of mindless entertainment but falls short of the original film. It’s easy to recommend given it achieves just what it sets out to do, provide fans with an excessively violent sci-fi romp/creature feature on hostile terrain. It’s surely no Last Crusade, but it earns its keep in the syndrome’s pantheon nonetheless.