When I first played Star Wars: The Old Republic in beta a month before the games release, I came away less than impressed. After quitting World of Warcraft years ago after suffering from severe boredom, I was hoping that Old Republic would be a breath of fresh air. What I got instead was a fairly standard MMO, with boring combat, terrible race selection and lots of talking. Needless to say I didn’t buy the game at launch, and hadn’t touched it since.

Old Republic enjoyed a ton of out of the gate success, as many MMO’s tend to do. But as time progressed, more and more players began to leave. Many cited poor pvp. Others lack of satisfying end game content. Some just returned to other games, such as WoW, though that game has also seen a decline of millions of players. Then something that is almost becoming expected happened, Bioware announced that Old Republic would be going completely free to play.

Now I’m not sure why this sparked my interest in a game I considered to be done with. Maybe I was just bored. Whatever the reason, I decided to play the free trial up to level 15 and decide whether or not I would continue to play the game when it launches as a full free to play MMO this fall. What I found is while it’s not the best game ever, Old Republic does do many things right and actually helps cure the boredom I found myself suffering from while playing WoW by doing one thing incredibly well – delivering a sense of player importance.

Bioware pushed Old Republic as a story focused game, and in that department it succeeded. Every character in the game has a voice and personality, and the world lives and breathes like few other MMO’s. However, what really hooked me was more than just talking and above average MMO storytelling. I felt important. I felt like a Jedi, and everything I did felt like something a Jedi would do. I wasn’t killing boars for their tusks or helping farmer Joe scare away crows. I wasn’t picking flowers or gathering wood. I was stopping a rogue Jedi from bringing down the Jedi Temple. I was aiding refugees surrounded on all sides by encroaching natives fueled by the dark side. Everything I did felt in character, felt important, and made me want to keep playing. 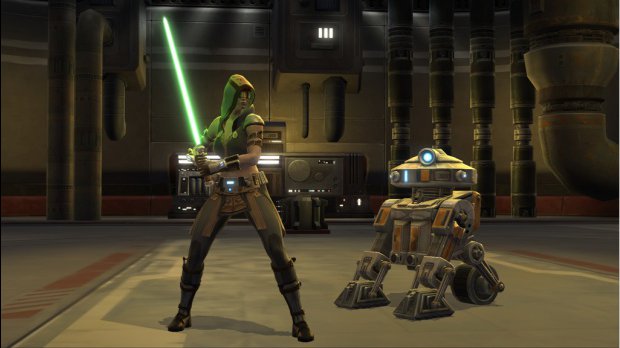 Perhaps I was too hard on Old Republic the first time around. As a huge Star Wars fanboy, I was upset by the terrible race selection from which I could choose to live out my Star Wars fantasy. You are telling me that in the Star Wars universe, featuring hundreds of great alien races, as a Jedi I can only be a human, a green human, a human with little horns on my head or a blind human? Oh, and Twilieks. So one out of five that is an actual alien race. Sith don’t have it much better, being able to choose from humans, grey humans, red humans and more humans with little spikes. What about Rodians? Wookies? Mon Calamari? All the races are in the game, I meet NPC’s every five feet that are some of the franchises iconic alien species. But for some reason I can’t be any of them. The combat, while still fairly standard, has begun to impress me with its visual style if nothing else. It’s more entertaining to watch my Jedi deflect blaster bolts and pull off visually striking lightsaber flourishes than it is to auto attack boars in WoW.

Now I don’t know how the full game is, having only played up to level 15, but if it is like the first 15 levels I will be signing up when the game goes fully free to play. Sadly, once you hit level 50 and your characters story is over, I feel like I will lose interest once again. But I guess that’s just when you make a new character and experience a whole new story. If you’re looking for an MMO to get into, or find yourself to be more of a single player gamer, give Old Republic a shot. You might just enjoy being the most important character in the Star Wars universe.