If there is a stigma against two sequels being filmed back-to-back, there is a more prevalent one yet, the curse of the dreaded threequelitis. It’s not an enviable position to be in, closing out a story that people have great anticipation for. As such, the pressure is on any filmmaker, and most don’t rise to the challenge, unfortunately. Return of the Jedi is easily the weakest of the original three Star Wars films, and the same fate befell Mad Max Beyond Thunderdome, both trilogy cappers succumbing to somewhat childish sidekick characters (as if Star Wars didn’t have enough already) to diffuse any sense of dramatic weight. Not to say that the two aforementioned films aren’t good, they merely mark a falling off in quality, in my opinion. This curse can be attributed to a simple thing: the need to go bigger than was possible before and thus substituting substance in certain sections to the scale that was not afforded the filmmakers before. This is made easily plain when looking at Mad Max Beyond Thunderdome, as it was the first film in the series to be a proper Hollywood production with a budget to match. But, enough about those movies, we are here to talk about another trilogy closer, one that separates itself from the bunch if only for the fact that it was filmed concurrently with its immediate predecessor and thus feeling more like The Matrix 2.5 than a proper third installment with its own arc to it. 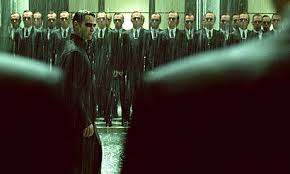 The film follows directly after the conclusion of The Matrix Reloaded (although there was no conclusion to anything there, hence the “To Be Concluded”), where Neo is trapped in a netherworld between the matrix and the real world while the Machines are just on the cusp of making it to Zion. Trinity and Morpheus spring him out through a death defying action sequence against a group of S&M suit wearing programs (at least, I’ve never thought of anyone there as being a human being “plugged in” for some reason. I could be wrong though) and Neo subsequently claims he must go to the Machine City in order to bring the violence to an end. Trinity goes with him. Meanwhile, Morpheus and Niobe travel to Zion to take part in the fight against the Machines.

That is where my biggest problem with this movie is, the huge action sequence with the Machines and humans of Zion squaring off. I’m sorry to say this, as the visual effects and time spent on putting this together are considerable feats, but it’s boring and feels superfluous. This notion is further expounded when the actual final battle comes around between Neo and Agent Smith inside the Matrix and it concludes the story in such a way that makes us having seen that huge, fifteen-minute scene feel pointless. The real struggle is within the Matrix, so why aren’t we spending more of our time on that? You give us a fifteen-minute battle sequence that just goes on and on and then we realize it was all a red herring for something else and, as a result, it’s boring. Plus, this huge battle scene takes away precious screen time from Agent Smith, who is ironically the only actor who expresses anything close to human emotion (which I think is intentional, but I am not a hundred percent sure why. I have my theories). It is in these sequences where something becomes plainly expressed, even if the Wachowskis didn’t intend it this way, that this is one movie padded out to its full extremes and released in two parts six-months apart from each other.

Watching both The Matrix Reloaded and The Matrix Revolutions, it becomes clear that after the success of the original movie the filmmakers were given absolute freedom over the artistic direction of the sequels, and while on certain levels what is trying to be expressed by is provocative and interesting, it’s delivered in such a ham-handed way over the course of two bloated films that should have been truncated down to one. To be honest, I don’t think anyone would have complained about seeing a three-hour sequel to The Matrix if it had this same story but trimmed a lot of the fat that made the whole back-to-back sequel thing possible.