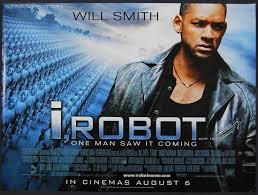 I am unabashed Will Smith fan. Always have been. In fact, I even owned all of his rap CD’s back in the day, including his Fresh Prince and DJ Jazzy Jeff ones. In short, if it’s got that Big Willie Style, I am there. That mindset spread into this summer as well with After Earth, a movie I really wanted to like based on Will Smith and the hope that M. Night Shyamalan could put his career on track. The movie was lackluster but I can’t say I was surprised given Will Smith’s recent offerings. In the past five years, he’s churned out I Am Legend, Hancock, and Men In Black III before getting to this year’s feature-length attempt to prove his son a viable action star. None of these films are what I would refer to as quality productions. All things considered, I don’t think I’ve actually enjoyed a movie of his since 2004’s I, Robot; and even there I have my reservations after giving it another viewing recently.

I, Robot is based on the Isaac Asimov book of the same name (although I’ve heard the movie has almost nothing to do with the book, a claim further expounded by the movie’s end credits saying that it was merely “suggested” by the book) and stars Will Smith as Chicago Homicide Detective Del Spooner, a man living in a future that is overrun by technological servants. It has gotten to the point where there is essentially a robot in every home, making sure our needs are met and abiding by the three laws hardwired into their programming. The laws are as follows

2: A robot must obey the orders given to it by human beings, except where such orders would conflict with the First Law.

3: A robot must protect its own existence as long as such protection does not conflict with the First or Second Law.

The laws are fool proof and make sure there is never enough leeway for robots to think for themselves. United States Robotics, a massive corporation, designs and sells these robots.

Detective Del Spooner isn’t too happy about this, however, and he is eager to prove that robots aren’t too great. This mindset leads him to making a full of himself on several occasions, as expressed by one of the film’s opening scenes. When a close friend commits suicide, a close friend who happens to be responsible for the creation of robots at United States Robotics, he is thrust into a web of intrigue and discovers the very first robot that isn’t hardwired to follow the three laws. 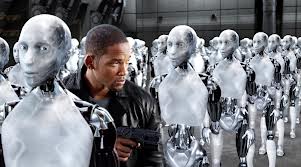 The movie has a very inventive visual style, as is to be expected from director Alex Proyas, who previously helmed The Crow and Dark City (a personal favorite). However, things are marred somewhat through an overuse of slow motion once the action kicks into high gear.

Will Smith is good and carries the movie adequately but it gets to a point where he is clearly playing himself more than his character. It worked very well in Men In Black and Independence Day, other science fiction adventures that use him to a slightly comedic bent in a way that makes sense in the movie and feels natural, but here it just seems a little off. His performance in the movie should have been more serious. It is because of this reason when he is required to play things straight it comes across as out of character.

This movie also has some of the most egregious examples of product placement in recent memory. At the beginning of the movie, Del Spooner gets a new pair of shoes: black Converses. At least two other times throughout the movie the scene is interrupted to either compliment how cool they look or how jealous they are of Will Smith for having them. It’s insane.

Despite all my problems with I, Robot, there is a good movie buried underneath all of this. The story has the makings of an epic science fiction film where robots begin to contemplate the meaning of their relationship with their creators and human beings have to come to terms. Will Smith can turn in a great performance if need be, and he goes half-measure here playing the commercially viable personality we all know and love and going for something serious too little, too late. I never felt I had a full sense of this character for this reason. It’s not fair to the movie, but I couldn’t see past Will Smith and the movie failed to immerse me. I had the same problem with Brad Pitt in Troy, a movie that came out the same summer.

There’s a scene late in the movie where the voice of the Del Spooner’s dead friend, Alfred Lansing (played by James Cromwell), who explains the mysteries of robot behavior as Spooner goes to investigate what happens to outdated robots. It’s a very effective scene and hints at something so much greater than this movie has to offer. Overall, I find it to be a fairly entertaining movie that stumbles over its need to be marketed and consumed as a Will Smith vehicle, not the science fiction thought provoker it perhaps should have been given the pedigree of the man who wrote the book this movie was “suggested” by.