This post is brought to you by: LOVEFiLM have a large selection of sci-fi movies which you can enjoy at home. So why don’t sign up to their free trial and watch free movies online. 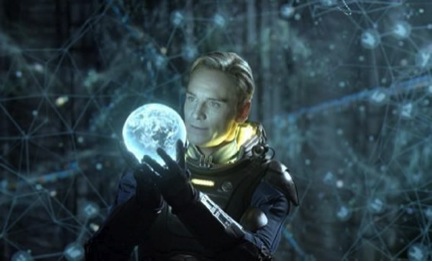 Prometheus, like so many great sci-fis can be appreciated on multiple levels: aesthetics are stunning, gory alien attacks, and of course, a deeper meaning. Visually, it is awesome. The CGIs of creatures as well as fantasy landscapes are amazing and really show where directors are now taking movie making technology post 300 and Avatar. Set design and costumes are seamless and artistically successful in not only creating a believable futuristic alien world, but also in setting up a mise-en-scène for the grander themes to be introduced. The cold metals and plastics of the ship combined with the desolate planetary landscape are cohesive with the film’s theme of creation through a dark and unsettling perspective.

Common plot lines for classic sci-fi include robots and aliens. Both relate to a contemplation of origin, purpose, creation, and resulting conflict in the pursuit of these always unsettled inquires. Alien intervention usually connects with some concept of God intervening with his/her creation.  Robots turning against humans represents humans playing God and having their own creations turn against them.

Like Prometheus, Kubrick’s 2001: A Space Odyssey includes both aliens and robots and is heavily referenced in Prometheus. Some people might criticize Ridley Scott’s somewhat literal use of elements from 2001 but I was not offended by the homage to Kubrick’s Dave and H.A.L. fused into Michael Fassbender’s character David. David is featured in a sequence in the beginning of the film in which he wanders through the spaceship as the rest of the crew sleeps, performing mundane, routine tasks, and emphasizing monotony and loneliness in the same way human Dave is featured in 2001. Through the repetition and reinvention of visual elements, audio clips, characters, and storylines of these sci-fi movies and novels made in the last century, sci-fi archetypes are being created that build on their exploration of abstract ideas like creation. By this means, one film can pick up where the other left off, not literally the same story but in the common attempt to understand humanity’s place in the universe. 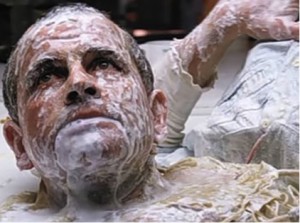 Prometheus is not a direct prequel to Alien yet there are some strong connections and the robot characters are one of those repetitions between films. Both David and Ash are not only human-created robots but they both deceive and betray their human creators, showing no sense of loyalty or remorse. “Doesn’t every son want to kill his father?” states David (or something to that effect). Dr. Holloway is jarred by this response. After seeking out the “Engineers” for answers to eternal existential questions like “Why are we here?” and “Where do we come from?” the researchers are unhappily met with the knowledge that their creators had endeavored to destroy them. Yet all characters are unable to identify the parallel to their relationship with David, a human creation that they treat inferiorly with the justification that he is not human and therefore undeserving of humane compassion. Not being human is also seen as the cause for his immoral behavior in betraying the crew yet Peter Weyland, a human, commits equally immoral acts of betrayal.

Ridley Scott delivers a film that encourages an audience to enjoy the thrills of aw-inspiring landscapes, gruesome depictions of both human and alien guts, and cheeky dialogue. But a movie named after the Titan who created man from clay demands some further contemplation. Coming home from the theater, moviegoers are able to ponder the story’s connection to other Alien movies as well as one’s own unanswered questions about the meaning of life.