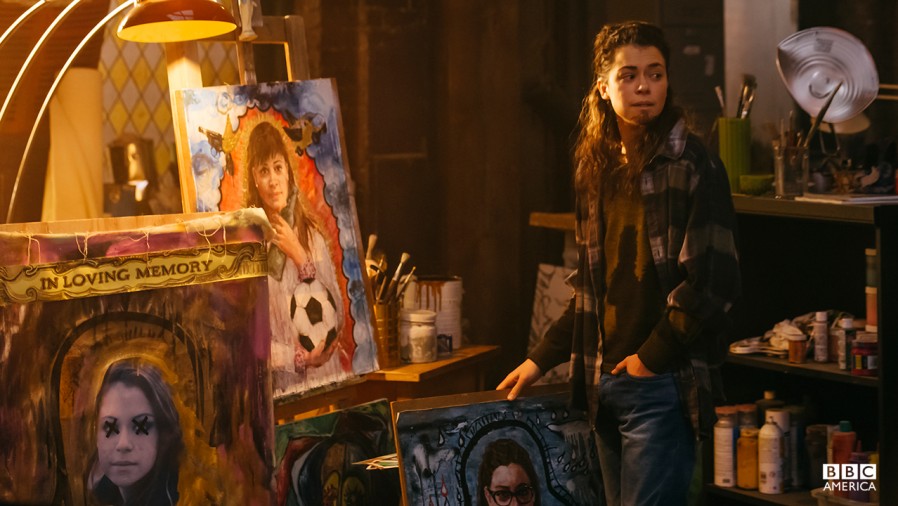 Ya’ll…who in the hell is this MAN?

This episode we got a rather startling introduction to a transgender man named Tony, or, as I like to call him, Sarah with a Beard. He approaches with Art, wanting to know answers and asking about Beth. His friend, Sammy, was killed, and Art instantly suspects the Dyad as culprits, but Tony has too many fish in his pockets. Completely Sarah: distrustful, suspicious even when not hiding anything, edgy badass look, avoids cops like the plague, an unusual obsession with nicknaming people, sex just dripping from the pores.

Art calls Fe, and he could’ve just outright said, “Yo, you a clone. These yo clone sistas! Welcome!” Instead, the two spend most of the episode being super sketch and boring the hell out of me. OF COURSE, Tony goes through Fe’s apartment while he’s out, discovering a snippet of the news himself. Fe tells Sarah to get her butt to his place so she can break the news, feeling that it isn’t his responsibility. I’m glad he did, because Tony’s reaction was probably one of the most relatable things I’ve seen on this show. Don’t you dare tell me I’m the only one who would check my double out and say, “Look at us. We’re hot. Damn, girl.” Ya damn right, Tony. Ya damn right. 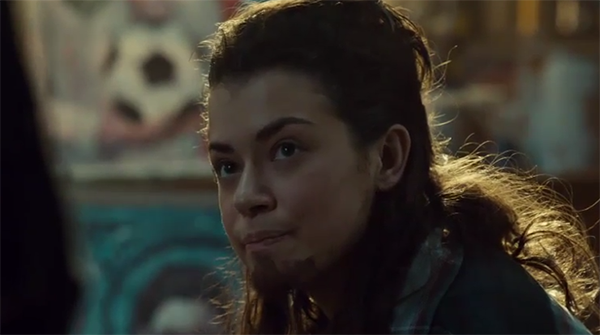 Since I suck, and this review is supersonic late, it’s given me time to completely ruin the episode for myself and go online reading spoilers like a drug addict. Found something I didn’t like: Tony just got here and already the birds online are chirping about Tony’s inauthentic representation of the trans community.

Let me start off by saying, no one in the comments identified themselves as trans. In the words of Daniel Sloss, “You can’t get offended on behalf of someone. Emotions aren’t transferable.” Also,  you begging hoebags can’t be choosers. I have read so much crap about how there should be a male clone, we need variety, an accurate depiction of blah, blah, blah. Well, we got him! And yes, he needs to get his eyebrows waxed and maybe some shampoo, possibly a comb, and he totally came onto Fe so I’m guessing he’s bi (?), or perhaps just overtly flirtatious. The point is, he’s ours, so shut up before they kill him off! They’ve always sent him off somewhere (but he got the Clone Club phone)! I also wasn’t a fan of how every seconds with Tony was was “gender… sexuality…between my legs…testosterone…” Calm the hell down. He’s trans, we get it. There is a stadium of seats waiting for you to SIT. One day, we can get to a place where someone’s gay, bi, trans, black, purple, elephant, whatever, and it doesn’t have to be the central focus of who they are. I’m just saying. 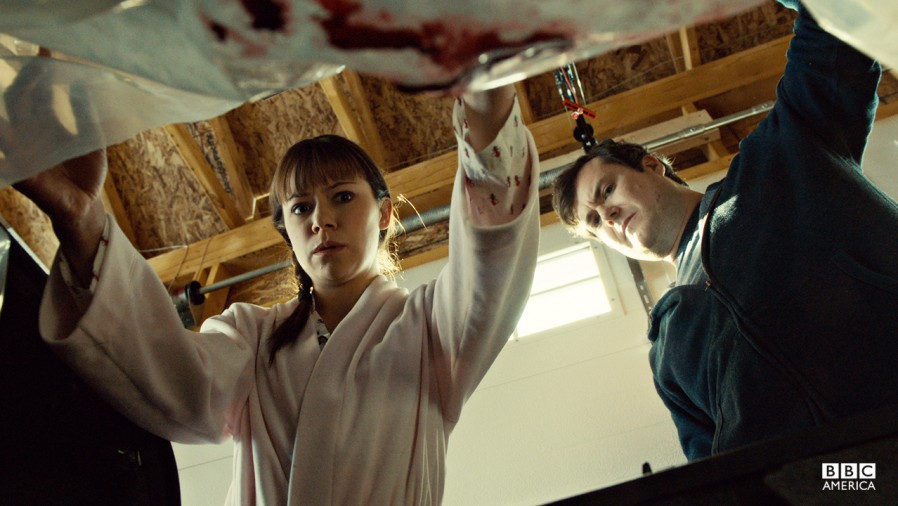 Anyway, enough about him. Look, he’s only been here for an episode and already he’s my opening. Sarah, Mrs. S, Ethan, and Kira are holed up at Mrs. S’ flat. They’re waiting to hear a response from Rachel. Rachel sends Delphine to announce that Leekie is dead (a heart attack on a plane—that’s the story) and she wants Ethan to bring his research to Dyad. The hope is that, if he gets back to work, a cure can be found for Cos. Problem with that is those hoes at Dyad can’t be trusted (excuse my language. I was watching The Boondocks before writing this, and now everybody’s a hoe). If they hand over Ethan, they have very little leverage, but Rachel promises that Kira will stay with Sarah. So far, I’d say Rach is good on her promises. But you know, you can’t trust nobody on this show.

Back at the Hendrix camp, this family had an explosive airing-out-the-laundry segment. What is this? Am I actually rooting for these two to work it out? Alison finally gets home from rehab, but she returns to a house in disarray. Donnie is snorlaxing around with liquor bottles in bed, basically a hot mess. Then, suddenly, the lug announces that he’s leaving. My first thought: hoe, where you going? Where? Who you leaving? Why? You think you could leave? You think we’re letting you leave? You think you’re the one walking out of this relationship? Hell no! You leave when Alison tells you to leave, and Alison wants to fight for her marriage today, so that’s what we’re doing!

I was actually very surprised at how Alison handled this. She was sympathetic, caring, and completely open with him once he laid all the cards on the table. Most importantly, she forgave him, and that did heaps. But that’s not the kicker. The kicker is that the entire episode I was wondering where the hell Leekie’s body was. Tell me why Donnie put him in the trunk! Tell me why that was Alison’s gun, a.k.a. the murder weapon, that he put BACK in her locker! Wow, thank you, Donnie, for framing me for murder. Ah, lug.

You know who was amazing this episode? Cosima! I mean, Cos is always pretty awesome, but I have to admit, our girl is everything when she’s pissed off. I appreciated this little break from Cophine because, as I’ve stated before, not a fan! Delphine got the locks changed on her and a good ole door to the face. It was the most beautiful scene on television. 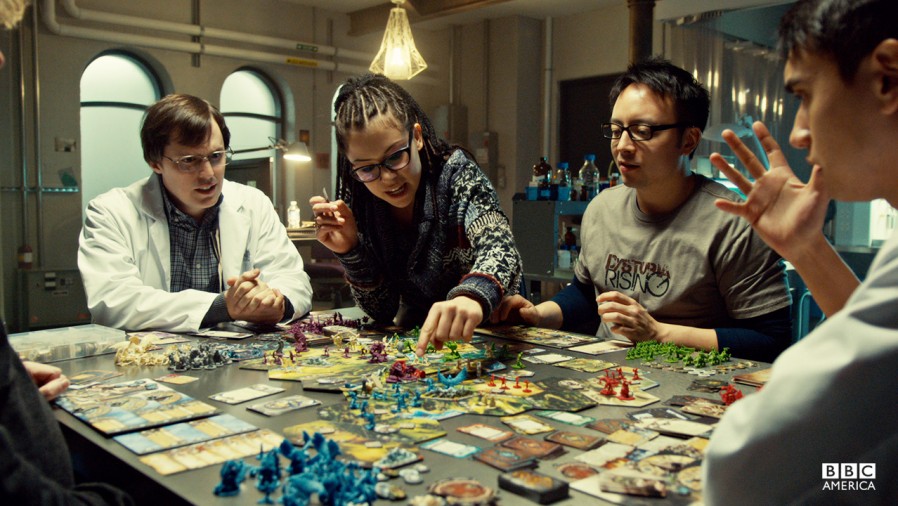 What game is this? D&D? I thought that didn’t come with a board?

Of course, everybody knows Cos is a plushy teddy bear, so the anger didn’t last long. They reconciled over weed and helium in true Cosima fashion, but clearly she’s a changed woman. I think once you burn Cos, she’s the type to forgive, but never forget. She made it clear to Delphine that the clones were all the same, all family, and it was mandatory that Delphine’s love for Cos extended to them. This request was sealed with an exclusive Cosima serious face threat, promising that if Delphine ever betrayed her again, she’d ruin her. Well, it’s about damn time! Obviously, Delphine agreed. How could she not? Gee, Delphine, it only took you till episode eight of the second season to stop being a sketch-master! I still don’t like her, but you can’t fake that kind of compassion.

I kind of feel like Rachel might kill herself. She is holding in A LOT, and that can’t be good for her health. There was that clearly desperate phone call to Paul’s voicemail because he’s been AWOL. Speaking of Paul, who the hell do you work for man? Who are you?

Ethan dropped a bomb that Sarah’s fertility was a defect. Can I get everyone in the room to say, “WTF?” So, they were building a clone army! If they weren’t, why would infertility be the end goal? Oh my god, was the plan to harvest their organs and stuff, then kill them off? That’s too simple though, but it’s beyond me. We already know that Project LEDA has military ties (remember the photo), and maybe the big origin story is that the government was harvesting clones for…for God knows what. I’ll tell you one thing, Paul has been suspicious since day one. Now I can start calling him Sexy Paul again because, as it turns out, he’s not just the clone puppy. He actually has depth, and that might be why he let Rachel and Sarah use him, so he could effectively stay in proximity like his real bosses told him to do.

Goddammit, answer some damn questions!! You can’t do this to people! You should be imprisoned and tortured until you divulge all of your plot twists!

To be honest, I was more shocked by Rachel’s reaction to the news. So, Rachel wanted kids? The backstory that I am conjuring in my mind: steamy romance with the love of her life, he left when he discovered her infertility, she hardened her heart to all human emotion, but like the Evil Queen Regina in Once Upon a Time, she yearned to love something and wanted a child with all of her heart. (Please read that in a dramatic romance novel voice.)

And next week, what the hell? What the pure hell? What did I say? I knew the next time we saw Helena she’d be pregnant with those freaky Prolethians! Gah! I can’t do this anymore! 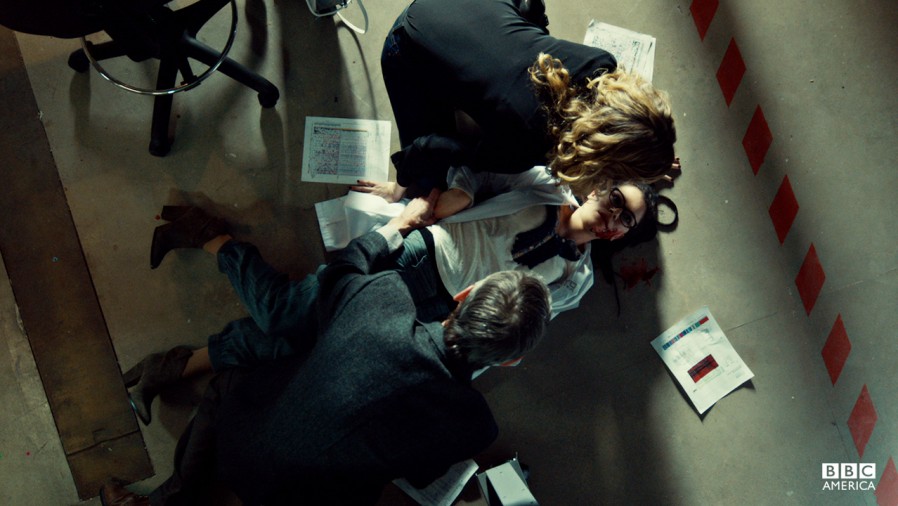 Okay, I was avoiding it, but I’ll say it. I’ll say it and then we all can just leave. Cos fell to the ground, having a seizure with blood coming out of her mouth…hemorrhaging, is it called? It looked freaking tragic. I almost jumped into the TV and choked Delphine for not catching her before she fell to the ground. Oh lawd…WHAT ARE WE GOING TO DO?! CLONE CLUB, assemble your respective prayer circles. I can’t deal. Don’t even look at me.