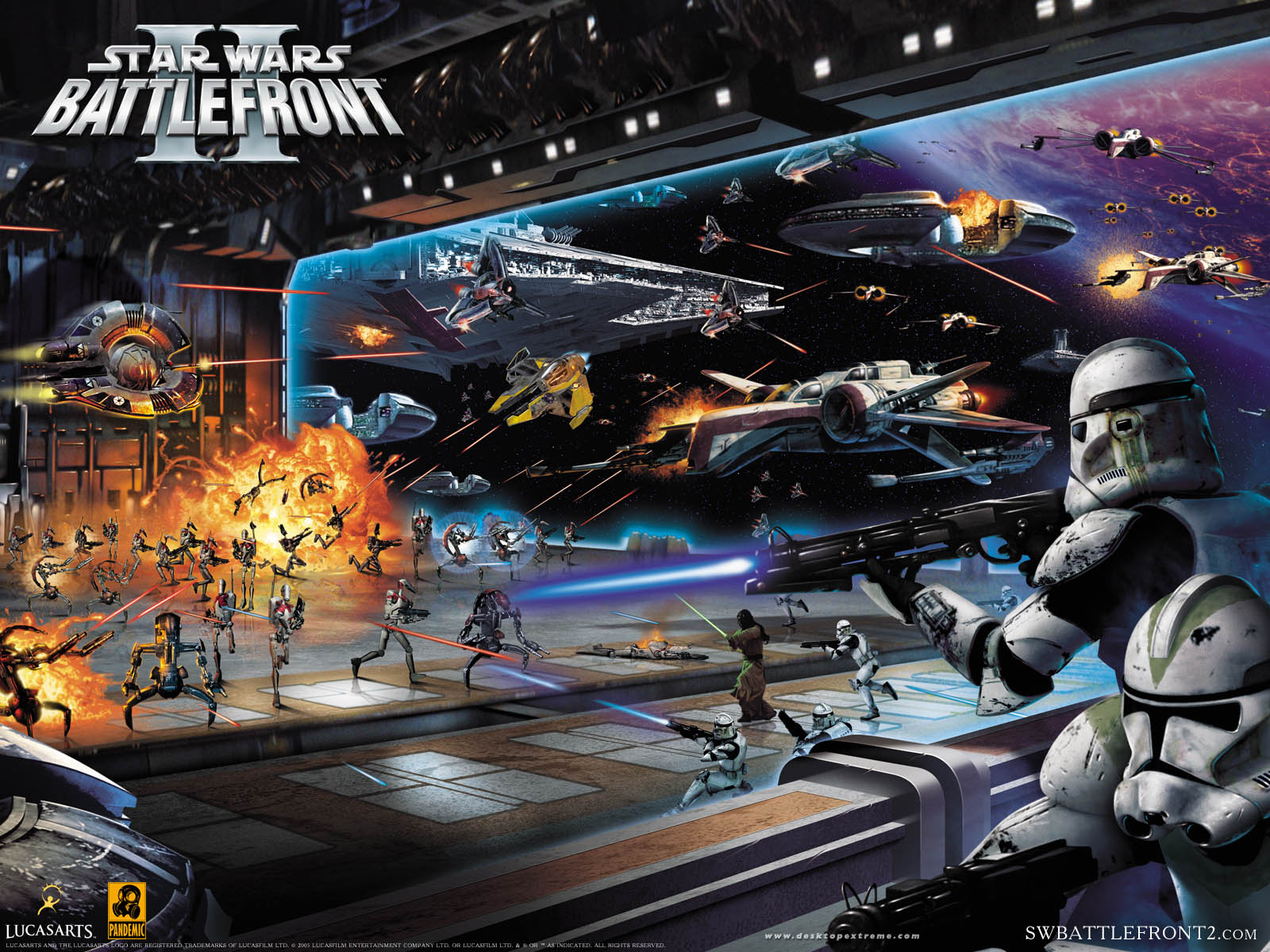 Star Wars Battlefront II came out in 2005.  It is the sequel to the popular Star Wars Battlefront.  It is a third person shooter that features large scale battles.  It pits two teams against each other, with the Empire against the Rebels or the Republic against the CIS from the Star Wars mythos.  Players control a simple foot soldier, which was a new take for a Star Wars game.

Unlike the first game, there are different game modes in Battlefront II.  Along with conquest from the first game, it also has 1 flag ctf, 2 flag ctf, assault, and hunt.  Conquest features multiple command posts on each map, which teams can capture and use as respawn points.  If one team has more command posts than another, then that side’s reinforcements will drain, giving them less soldiers for the fight.  1 flag ctf has a neutral flag that each team tries to take into the enemy’s base, and 2 flag has a flag for each team.  The other team tries to steal it and bring it back to their base.  Assault features a number of points that each team attempts to reach.  These points are gained by killing enemies, etc.  Hunt works the same way as assault except it features factions that are not normally available.

A lot of work was put into the campaign in Battlefront II.  Each mission has objectives to complete, allowing for a completely different experience from the standard game.  It is also decently long, providing plenty of hours of game play.  Galactic conquest was also overhauled to include actual strategic elements.  Now each player starts with just the soldier class, though they can spend credits they earn to unlock more soldiers.  They can also purchase bonuses to use in battle as well as fleets.  Fleets move and attack planets, where a conquest battle will commence.

Space battles are a new addition as well in Battlefront II.  They feature a capital ship for each team, that has a number of critical systems as well as one to three frigate support ships.  These ships and systems can and should be destroyed for a lot of points.  Each capital ship has a hanger where ships spawn to be taken out into space to dogfight or attack the enemy ship.  There are systems that can be destroyed from the interior of the ship as well, allowing boarding attacks to be effective.  They can be a lot of fun, though for some reason, aside from the snowspeeder in Hoth, there are no ships present in ground missions.

There are a lot of improvements in Battlefront II, such as the addition of sprinting, a stamina bar, and allowing the player to roll forward as well as to the side.  It changed the green and red scheme to blue and red, which helps colorblind players, it expanded the single player experience, and added new playable units.  The maps however, are much less interesting in Battlefront II than they were in the first game.  Star Wars Battlefront had several great maps: Rhen Var Harbor, Bespin Platforms, Kashyyyk Docks, Rhen Var Citadel, Bespin Cloud City, and Tatooine Dune Sea.  All of these maps were abandoned in the second game, which is a shame, as none of the maps in Battlefront II hold a candle to ones I have listed.  This problem led to me playing Battlefront II much less than the game that came before it, and once again the sequel did not last as long as the first game.

Despite this fact, Star Wars Battlefront II is a great game.  It is a bit outdated now and the multiplayer is probably defunct by this point.  I’m not sure if I would recommend it as merely a single player experience.  If a third Battlefront game were to come out though, I would drop 60 dollars on it in a heartbeat, and I would recommend you do the same if that time comes.