While new fall television series are trying to find their audiences I know viewers are still anxiously awaiting their favorites to come back. Waiting months to sit through a long premiere episode that may or may not answer that cliffhanger is TV at its best. 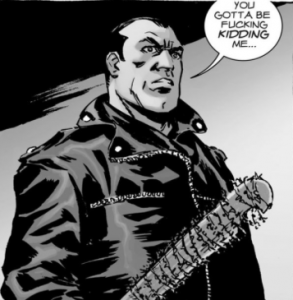 Of course, during the hiatus there are always forums and news articles abuzz with potential spoilers and this season is no different. However, fans of The Walking Dead have been waiting for a certain character to show up for the past five years and now they may get their wish.

There are a few clues that the character Negan from the graphic novels may appear on the upcoming sixth season of the show. There are a few new faces showing up like Tom Payne who will be playing Paul Monroe, but better known as Jesus. Xander Berkeley was also cast and though it was rumored that he would play Negan, but it looks like he’ll play a character named Gregory, who shares similar qualities. Both actors have options for spots in season seven.

Now, you say, that debunks the Negan theories, right? Not exactly. Just very recently a fan site posted a casting call to Facebook. The post reads:

“[ORIN] 30s to mid 40s. A physically imposing, charismatic, brutal, smart, ferocious, frightening, hilarious, inappropriate, oddly friendly, fun loving sociopath that is both a leader of men and a killer of men. He has both a practical and emotional intelligence, he’s a brilliant strategist, he’s pure, dangerous, murderous, often gleeful id, that still has both discipline and a code. And he has a temper that can vaporize people. He’s truly one of the strongest personalities ever…”

Orin is just a code name, of course. The big wigs trying to throw fans off, but, as evident in the comment section, people are freaking out over the possibility of seeing some Negan. The casting call also cites that the character will first appear in episode sixteen of the upcoming season, which means the finale. What better way to end with a bang then to end with a barbed bat? Look it up.

Here’s the most recent trailer for season six beginning on October 11th.

If you enjoyed Carly’s naggin’, you can find the rest of her work right HERE on Sci-Fi Bloggers. You can also follow her on Twitter @MrsCarlyRodgers.