I haven’t been able to write on Sci-Fi Bloggers for quite some time due to the fact that I’ve been on the planet Vulcan.   Well, not really.  But I have been working on various projects & geeking out at conferences and events over the summer.  I’ve missed it.  But thanks to Dylan and the team I’m able to share what’s been going on in my world of sci-fi! 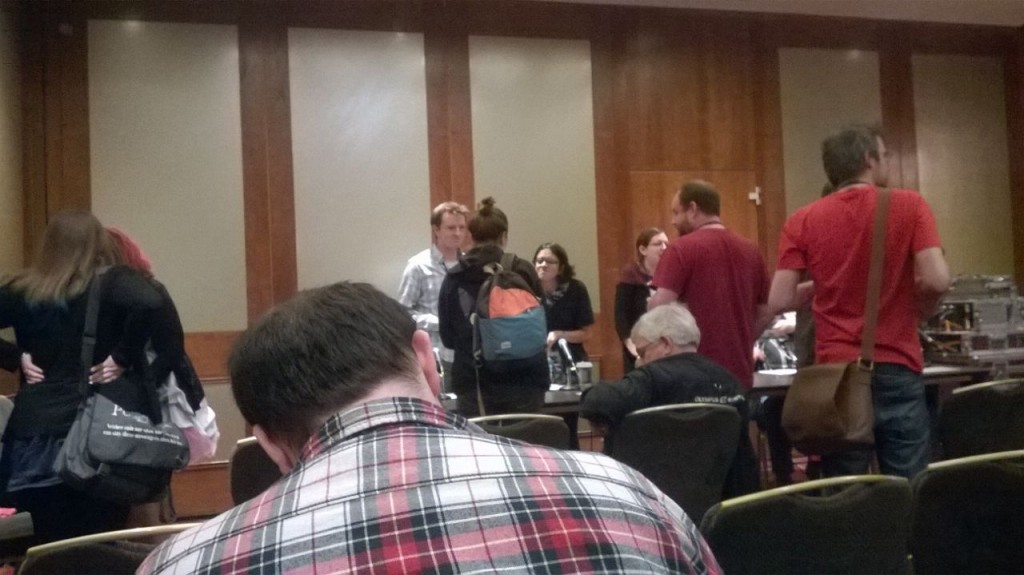 “Yes, I can do the Vulcan hand salute too.”

This Sci-Fi & Fantasy conference/convention is held every year in London.  It brings together professionals and pundits that work, write, speak and perform in the world of science fiction and fantasy.  I was invited to appear on 2 panels at the conference.  The best bit about this was that I got to talk about one of my favorite sci-fi shows: Star Trek!  The first panel was all about being a Star Trek fan.  The second was about the future of the franchise.  I was quite honored to be appearing at the same conference as people like Paul Cornell and Joe Abercrombie.  Aside from a slightly awkward rant from a dedicated Trekkie/Trekker in the front row, the panels were amazingly fun!  They proved to me that Star Trek fans are not the stereotypical “nerds” the media often portrays us as.  We’re normal, well adjusted, inclusive, welcoming, funny and cool people.  If you’re ever in London in early August, the conference is a “must-see” event.  It receives excellent ratings from Time Out, The Sci-Fi Fantasy Network and many more media outlets.  If you’re interested in knowing more, you can read about the geek fest in my blog and at The Huffington Post.

The Earth Experiment and an Agent’s Feedback

All throughout July and August I was trying to finish the second draft of a sci-fi novel I’d been working on.  I finally wrote “The End” three weeks after Nine Worlds.  Now whilst this may not be of any interest to you, it marked a turning point for me in my writing career.  Writing a book is something I’ve always wanted to do.  I’ve always struggled to finish writing a novel.  I’d written a messy first draft of one back in 2013, but it wasn’t sci-fi so it doesn’t really count here.  “The Earth Experiment” is the first of many (I hope!) sci-fi books I’d like to write.  What was even better was that I submitted the first 500 words to a London-based agent at an event, and she liked it.  I’m not saying that I’m going to be a sudden sci-fi sensation, but it was nice to gain positive feedback on something I’d worked really hard on.  I don’t have a deal (yet), and I still have a lot of editing and work to do before I get close to being published.  Writing I’ve discovered, takes practice, more practice, and then even more practice.  And then some more practice.  I’m not the next Terry Pratchett, Neil Gaiman or Paul Cornell.  But I am me.  And hopefully sometime in the not too distant future I’ll be the best “me” there is.

I have either just made one of the best decisions of my life, or done something really stupid.  I’ve decided to sell my share of a business I got involved in to help support my writing career a few years ago.  It was useful while it lasted, but it was taking me away from writing and expanding my writing career.  I’m a huge science fiction nerd.  I love reading it, watching it and writing it!  That’s what I want to do for the rest of my life.  So I’m trying to give myself the best shot at making sure I can do it.  If it doesn’t work, at least I can say I’ve tried.  I hate regrets.  Long Live my world of Sci-Fi!

If you enjoyed Allen’s return to the site, you can find more of his work right HERE on Sci-Fi Bloggers. You may also visit his website by clicking HERE or follow him on Twitter @TheOnlyJohnnyA.