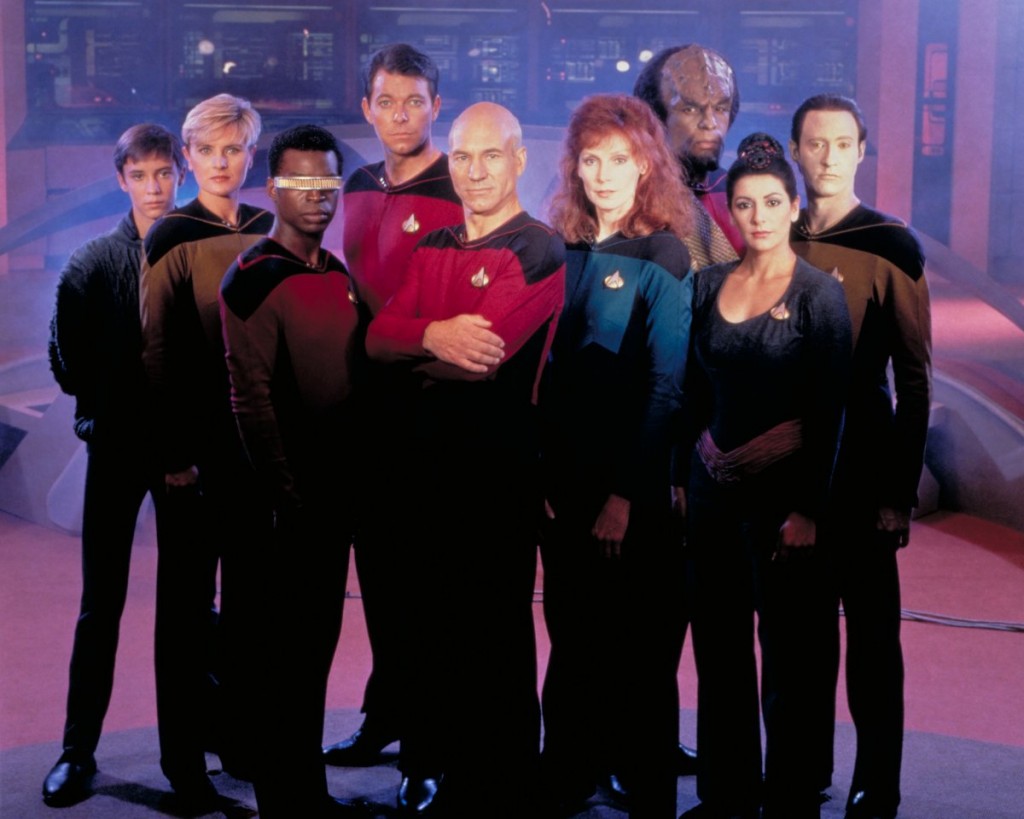 “Space, the Final Frontier. These are the voyages of the starship Enterprise. Its continuing mission: to explore strange new worlds, to seek out new life and new civilizations, to boldly go where no one has gone before.”

I avoided watching this show for far too long. After finishing the first season, two words come to mind: no regrets.

Right away, I was hooked. I’m not going to beat around the bush, I’m just telling you how I felt, and how I currently feel. I knew there would be “Talky and Techy” stuff, the warp core discussions and dilithium crystals, some political intrigue and conspiracies, the Prime Directive being tested, probably broken even, and a little action. What came out of left field, for me at least, was the spirituality, the love (not romance, love), and even the series’ fascinating sense of life. Every character is well crafted and valuable, and every episode—every episode—is not only entertaining, but memorable. It’s something you have to see to experience, so, for those who haven’t, head over to Netflix (as of December, 2013) and start watching.

I’ve got more to say, but this is mostly for those who’ve already seen it. And remember, I’ve only watched Season One, so don’t post a bunch of spoilers in the comments. 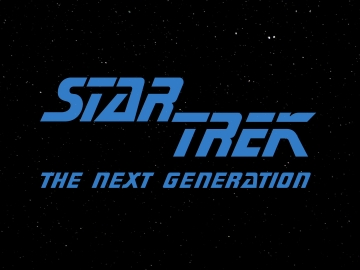 Immediately, one of the biggest things that caught me off guard, in terms of character development, was that Captain Picard wasn’t just some calm, precise, flawless leader who had all the answers when problems came his way. Picard made mistakes, was often too forceful, too aggressive even and, most notably, wasn’t very good with children and more  “lax” adults. He had to evolve over time, and I saw his evolution occur in a natural, believable way. This process was simultaneous with the growth of Wesley Crusher, who I personally feel is a severely under-appreciated character. Yeah, he isn’t perfect, but I’ll let you in on a little secret: I’ve seen the first episode of Season Two, and there’s this scene with Wesley in it that had me absolutely riveted (a conversation he has with Guinan). It’s great, and it might change a few people’s minds about him, if viewed a second time.

(I honestly think a lot of the “Wesley hate” comes from the fact that he isn’t cynical, aggressive and rude, as teenage boys often are, and some people think that’s unrealistic. I personally think he’s an ideal to be looked upon, honest, curious and creative. If that annoys some people, I guess they just don’t like that sort of character.)

Riker is great, especially after having played the Mass Effect series as much as I have (male Shepard’s personality seems to be based loosely on Riker and Captain Kirk from the original Star Trek series). He’s the one with the sharpest eyes, the cleanest hits and the boldest tactics, acting often as a model for Picard. I expected it to be the other way around, the young first officer learning from his captain. And, while that does happen, it’s definitely very balanced, having the captain and Riker acting as both teacher and student, back and forth. I like that, as it shows that everyone can learn and change from one another, and not just the many from the few. 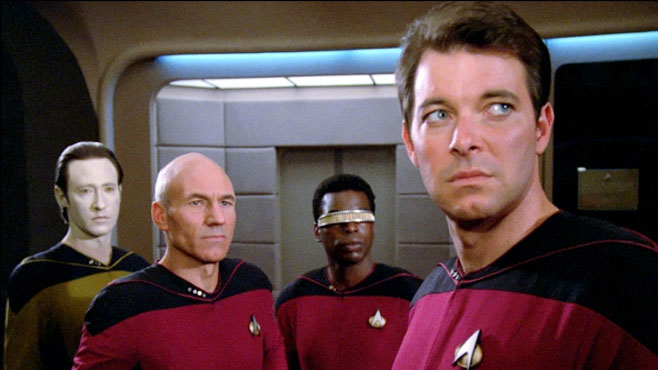 The entire cast has this amazing synergy, and the writing doesn’t hurt. Yeah, in the beginning some characters were a little melodramatic, even forced at times emotionally, but by last two thirds of the season, they all stick with you, since they all have moments that make you go, “Damn, they even—*sniff*—got me to—*sniff*—TASHA!” (For anyone who cares, I’m among the few who think that—major spoiler—Natasha Yar’s death was perfectly appropriate. Not everyone has a glamorous demise. In real life, some people just get offed and that’s that, no slow motion, no sad piano music, nothing. The brevity of Tasha’s death is offset by her touching funeral, which got me right in the gut. This scene’s impact was only helped, not hurt by the fact that she died so quickly and in such a non-romantic fashion.)

Of all the crew, I think my favorites have got to be Data and Worf. They’re just so funny, and yet have some of the more dramatic episodes dedicated to them (“Datalore” and “Heart of Glory” are great episodes; do not skip them). Their attitudes match and contrast their physical/species personas very well. Data is just as much a calculator (match) as he is a curious youth (contrast), and Worf is just as much a beast (match) as he is a disciplined, loyal member of Starfleet (contrast). Again, it all comes back to the writing. The characters have received such praise, as well as the cast that brought them to life, but someone had to conceive them, someone had to have the idea, “Let’s have him see in a way we can’t, a way that may be even better than our normal vision,” and give birth to Geordi, and Dr. Crusher, and Troi.

The writer creates the foundation. Without a story, there is no show. 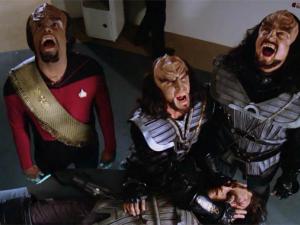 The Next Generation doesn’t just have great characters. it also has intriguing worlds to visit. From a planet where the mildest of crimes can mean the death penalty, to one where the physical manifestation of Evil waits for its next victim, there’s plenty to see and plenty to do. The governments and societies vary widely and, because of this, have to be interacted with carefully. When dealing with a civilization that’s women are superior to its men, who will be selected to discuss diplomacy? A woman, for her strength, or a man, for his ability to seduce the alien race’s leaders? How about species so close to extinction they need to steal the children of your ship’s crew? Do you give them what they want? Is there a substitute? Why do they need the children so badly? What’s causing them to die out as they do? These are the situations that make this show so interesting.

One in particular, “Coming of Age,” is one of the better character related episodes, addressing the overall growth of the crew, as well as their loyalty to Picard, who has improved as a leader. It examines the danger of witch-hunts and how easy it is to simply say, “Something must be wrong here, because it’s bad everywhere else.” And this seems like a “simple” lesson, but complexity isn’t necessarily depth. See, we can have a uncomplicated idea with many levels. Isn’t that how life works? “All men can do great things.” Really? Can they? Why? What gives them this ability? Is it innate? Is it given to them by those around them? Is it necessary? Are these questions even necessary? Do they matter? Does any of this matter? Do “great things” matter? See, that’s a simple concept with depth, and Star Trek: The Next Generation appears to have mastered this in its clever writing (again, it all starts with the pen).

The slow introduction to the universe gives new people like myself time to adjust to everything that’s going on, while also giving veteran fans something to chew on as they look back at old episodes (I know, I watched the show with someone who has seen every episode multiple times). It didn’t take me long to understand the relationship between the Federation and the Klingon Empire, the importance of the Romulans, the reason for the Prime Directive, etc. Everything felt accessible, without sacrificing the attention to detail that Star Trek as a franchise is known for. Great work on the part of the writers and directors, the latter having a just as difficult job, if not more difficult, than the writers (bringing all this to life must have been a daunting task). 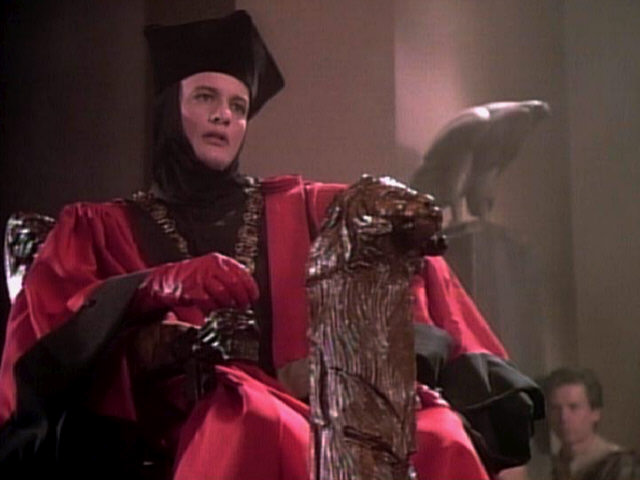 One thing I’m really glad about is that the Q aren’t overused as a race. Their power would be way too much of a deus ex machina in some of Season One’s scenarios. If you’re going to make God (or something very close) one of your characters, better not have him abuse His powers in a story about human beings. He might take away some of the fun if he appears too many times. Now, that is not to say I’m against the use of spirituality in writing, quite the contrary. The spiritual side of Star Trek: The Next Generation is one of the things that kept me going. The creative use of the soul and other incorporeal forms as storytelling tools and devices blew me away, and I can’t wait to see what they do next with it.

All in all, Star Trek: The Next Generation was a blast to watch. It’s something I think every up and coming writer/director of science fiction, or even an actor in sci-fi television and movies, should take a look at, if only to see where many concepts in the genre came from. It’s fun, original, intelligent, thought-provoking, and powerful. It has a few rough spots, but get through them, because every geode has a pile of crystals.

Until next time, this is D. Alexander wishing you a happy It’s the Most Wonderful Time of the Year Day! 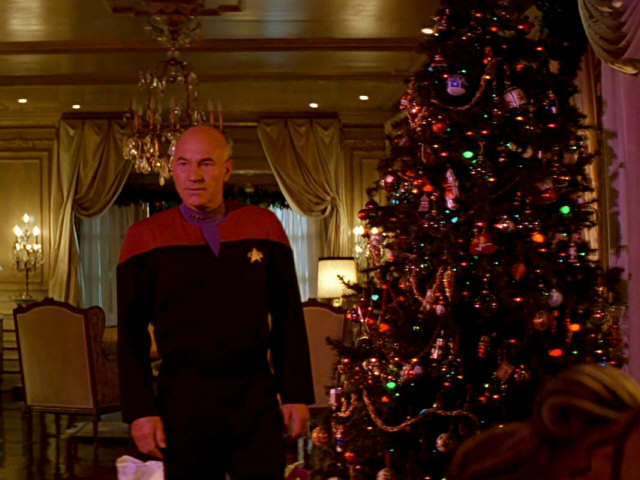