While watching Interstellar, something a friend of mine once said popped up in my head. He said, “Christopher Nolan movies are great at making it seem as though it’ll be the end of the world if the characters don’t succeed.” It’s incredibly apt that these are the very stakes in place as Interstellar unfolds, and, fortunately for us, the soulful center of the material is never lost, even amidst almost boundless spectacle.

In the future, an ensuing ecological disaster has humanity approaching an expiration date. Food is scarce. Dust storms are the new blizzards. Cooper (Matthew McConaughey), a former ace pilot for NASA whose job was rendered useless when earthbound concerns superseded space exploration, farms the last agriculturally feasible crop around, corn, and does his best to raise his two kids. Destiny seems to interfere when he is tapped to pilot a spacefaring mission through a wormhole near Saturn in the hopes there will be a planet on the other side that’s habitable.

In the landscape of mainstream, big-budget cinema, seemingly devoid of invention or surprise, it’s refreshing to watch a filmmaker who continually finds ways to up the ante. Marrying the cold aesthetic and reach of something like 2001: A Space Odyssey with the beating heart of Spielberg, Interstellar takes its audience to the furthest reaches of speculative science fiction and grounds the proceedings in a warm sentiment that never feels manipulative. The grand ambition and massive budget are put to good use on a final product that feels uniquely personal and simultaneously accessible as popular entertainment.

Matthew McConaughey is the human center of a deep roster of stars. He’s got a good heart yet is prone to mistakes, very much in line with the prototypical flawed male protagonist as seen in other Nolan films like Memento and Inception. We become deeply invested in his dilemma. Anne Hathaway and Jessica Chastain are the two major supporting players, selling their roles so well that we buy a lot of the more potentially cringe-worthy moments, for instance an extended scene discussing the nature of love. Numerous small roles are filled superbly to the point where not all are given the spotlight, albeit with one exception, but each makes an impression. 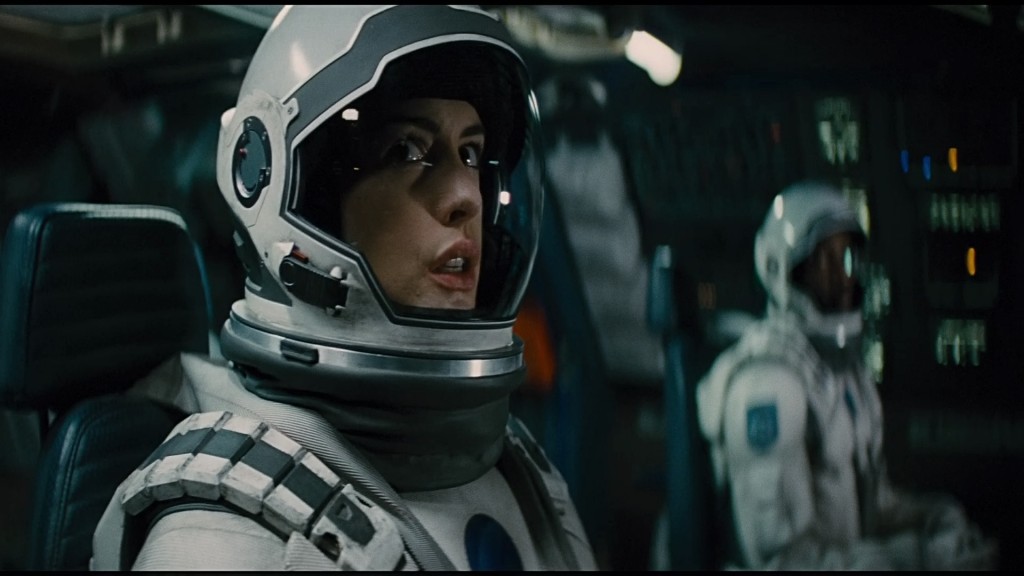 After a first act that takes place entirely on Earth, the journey into space is an episodic exercise in brilliantly realized set pieces. A waterlogged planet with waves as high as mountains has been shown in the trailers but is still worth the price of admission alone just to see on the big screen. The tension never lets up as the film progresses. With seamless visual effects, everything feels plausible to the human eye and we truly believe everything these characters are going through.

Hans Zimmer does some of his best work on the score here. It’s moody and stirring in all the right places, providing an elegiac, organ-like symphony that beats on as some sort of funeral march throughout. It’s a perfect accompaniment to the film.

One small caveat I have is some of the sound design. In certain points, the oppressive noises from such locations as the inner workings of the spaceship almost drown out what characters are saying. It’s not so bad that you can’t figure out what’s being said, but it makes it so you have to strain your ears to fully get it all. Such a minor qualm is easy to forgive, however, when some of the very next shots are of the breathtaking silence of space and the movie keeps going and you find yourself fully invested then emotionally floored in ways never thought possible in a Christopher Nolan film.

Interstellar is ambitious and riveting from start to finish, a film that never fails to grasp your attention during its three-hour run time. With dazzling visuals and a gooey yet strong emotional core that’s truly affecting, it’s one of the best movies I’ve seen all year.