Chappie highlights so much of what can go wrong with contemporary science fiction. It’s a simultaneous source of wonder and disappointment that there’s still a good movie just bubbling under the surface.

For starters, it begins with superfluous “talking head” documentary-style footage (so named for the fact that it’s people talking to us, usually seen in documentaries or informational pieces) that precedes the fake news broadcast/exposition dump required to get us into the story. This has been done so many times over the past couple years that it’s become lazy. It’s an alarming sign that perhaps the filmmakers don’t know any clever ways to introduce us to the world of the film.

Most damning, the movie goes off the rails in a final act that discounts logic for explosions and travels down the road to the “miraculous” so quickly and without warning that it’s all very questionable at best.

The film follows robotics designer Deon Wilson (Patel) in the midst of almost unparalleled success when his creations (looking similar to the robots seen in Blomkamp’s previous film, Elysium) are used to clean up the streets of Johannesburg. Used merely as simple peacekeeping automatons, Deon believes the potential of Artifical Intelligence has been unfulfilled and seeks to reach “a higher level.” Immediately after cracking the secret to robot consciousness, he is kidnapped by low-level drug dealers (led by Jones and Visser) and this magnificent breakthrough, a thinking, feeling robot named Chappie (Copley), comes to live with them.

With a battery that will last only five days (is that a magic number for Blomkamp? Matt Damon’s character in Elysium only had five days to live after an exposure to radiation), Chappie grows remarkably from a scared, child-like innocent to a “gangsta” talking thug and comes all the way up to the question that vexes all with sentience: “Why am I here and why do I have to die?”

At least, he would be able to struggle with these concepts if it weren’t for all the noise that comes all too frequently. There’s just too much going on that nothing gets explored thoroughly. On top of the main plot as detailed above, Hugh Jackman plays a rival weapons designer envious of Deon’s success and hell-bent on jumpstarting his own urban pacification robot, a large human controlled monstrosity called a MOOSE (basically the ED-209 robot from RoboCop). 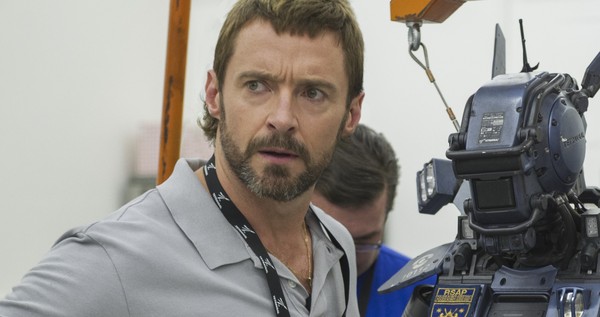 Jackman essentially serves the same function to this movie as Sharlto Copley’s villainous Krueger from Blomkamp’s Elysium. He’s a manic contrivance who does nothing but stare angrily at Deon and his presence merely ensures we have a villain for the last action set piece. The only halfway interesting thing about the broad strokes in which this character is written comes when he abuses the power afforded him by his military-level weaponry. He relishes in the opportunity of gunning down all in his path.

Continuing the burgeoning excellence of motion capture, the standout in last summer’s Dawn of the Planet of the Apes, the performance work by Sharlto Copley as the titular robot is fantastic and very convincing. The movie treats him as a combination of a toddler and a dog in training for two thirds of the run time, but it’s just a wonder how real he seems (presumably because of the eyes). A lot of his formative sequences are played for laughs, like when Ninja, one of the drug dealers, tricks him into stealing cars for him, but it all feels like it’s occurring organically from the story, despite some reservations I had about these gangster characters.

So, once we get to the big gunfight between gangsters and robots, it all just feels like a distraction from what the movie should have really been about, and presumably wanted to explore, judging by what happens in the last ten minutes. A certain, extremely important plot development occurs almost out of nowhere and feels insultingly simplistic when it’s fighting for space in the narrative alongside Hugh Jackman’s antics and a citywide riot. 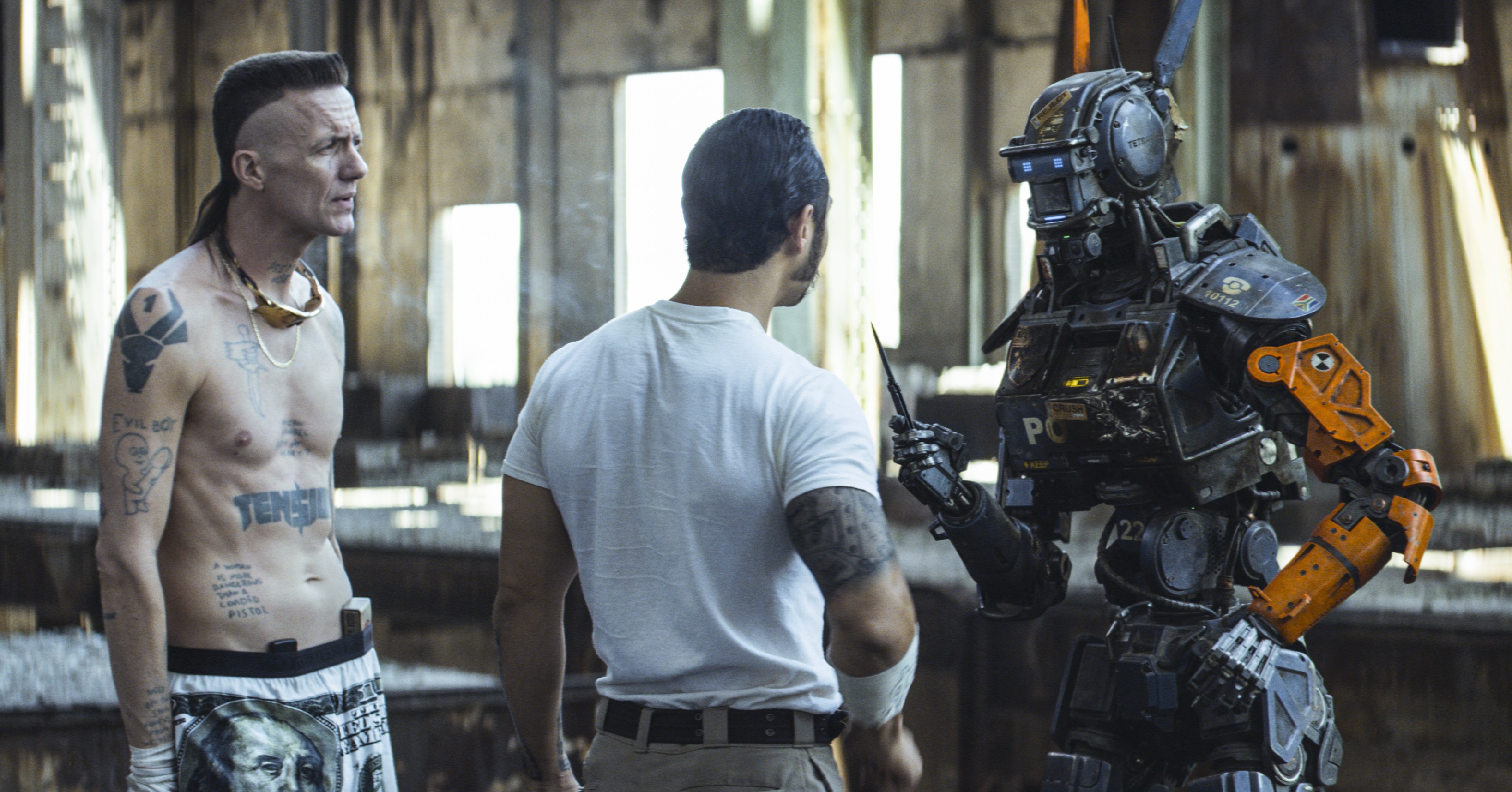 I don’t mean to suggest how filmmakers could possibly “fix” their movies, because, honestly, what do I know? But, it stands to reason that a movie which tries to do too many things at once would fail to do either unless a tonal harmony is achieved. Without warning, Chappie shuffles through moments of humor, heartbreaking revelations, brutal violence, extreme camp and some unearned heroic sacrifices that do nothing but feed the ego of a rap duo who are supposedly playing themselves (Visser and Jones provide a song for the end credits in tandem with their acting duties).

Following the great success of District 9, director Neill Blomkamp was the great hope for original mainstream science fiction. He’s so far failed to live up to the promise of that earlier film. Despite the technical mastery on display, Chappie is overstuffed and too often loses its focus just like the childish robot at its center.

If you enjoyed N. Demmy’s disappointment, you can find his latest work right HERE and his earlier articles and reviews over HERE.