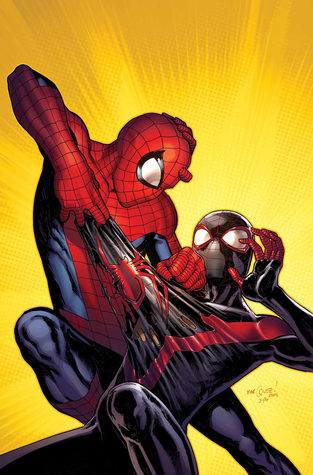 In October of 2000, Marvel Comics created the Ultimate Universe. This alternate dimension took favorite characters and de-aged them to make them more relatable to a new generation of comic book fans. Additionally, it freed the characters from the decades of back-history that otherwise would intimidate the new generation from reading the comics. Then in 2011, Marvel shocked the world by killing off Ultimate Peter Parker. No last-minute revivals, no miraculous resurrection. Peter was gone. Dead. Finite.

Since then, Miles Morales has been protecting New York as the new Spider-Man. He’s got the blessing of the original Peter Parker, as well as the support of May Parker and the rest of the extended Spider-family. In fact, if the Ultimate Peter Parker somehow came back to life, he would be proud at how Miles has made Spider-Man his own.

Oh wait. Peter does come back. It’s all in the Miles Morales: The Ultimate Spider Man – Revival graphic novel. But we’ll come back to that.

The novel begins at the anniversary of Peter Parker’s death. Every person Peter met, teamed up with, or flat-out inspired comes together to reminisce about Peter and who he might have grown up to be if he were alive. Miles comes from the shindig conflicted: he wants to tell his girlfriend, Kate Bishop, the truth, and after a heart-to-heart with Mary Jane Watson (Parker’s girlfriend), decides to do so tomorrow. Right now, however, he just wants some sleep. So he goes home.

And who does he finds scavenging the apartment for his web-shooters? You guessed it. Ultimate Peter Parker. 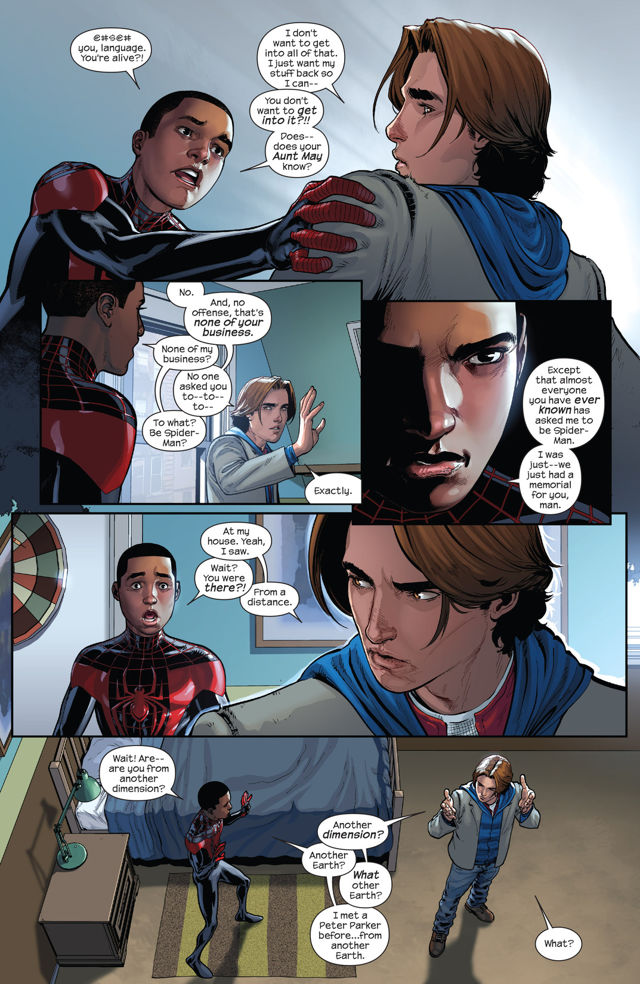 The meeting doesn’t go well. Miles obviously wants answers, which Parker is hesitant to give. Ultimately, Parker escapes with his web-shooters, which leaves a freaked-out Miles screaming about clones for two whole pages.

Oh and then Norman Osborn shows up. Miles holds his own for a while, but its only when Ultimate Parker shows up (a risky move, considering he wanted to stay under the radar) that the Spider-Men force Osborn into retreating.

What happens next is my favorite part of the whole book: the exchange between the two Spider-Men. There’s a whole team of SWAT ready to turn them into Swiss cheese, and the two are trading barbs, making light of the situation in true Spider-Man fashion. It lends a natural, organic chemistry between the two that really sells their camaraderie. 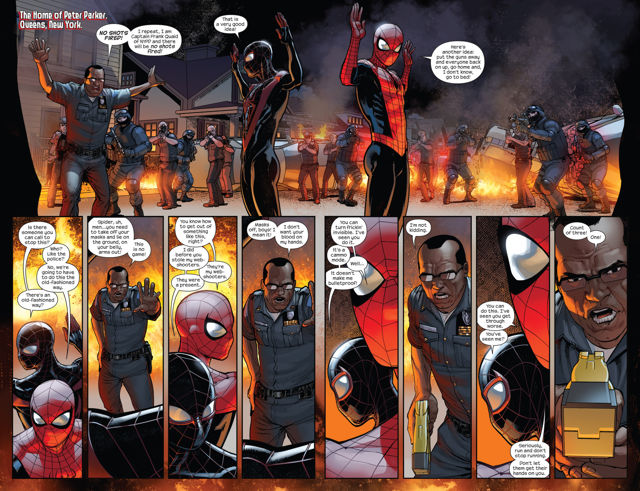 For the past three years, Miles Morales has gone above and beyond in proving he’s worthy of the Spider Man name. The world has gone out of its way to give him shit: his mother died in his arms, his uncle blackmailed him into committing crimes, and his father disowned him once he discovered Miles’ dual identity. He eventually found a family with the Parkers and their “extended family” of various mutants and meta-humans. So while I’ll always have a soft spot for Peter Parker, his sudden appearance leaves me wondering about Miles’ future as Spider-Man.

And of course, there’s the whole “How are you still alive?” thing about Ultimate Peter Parker. Is he a clone? An intelligent zombie? A vampire able to live in the sunlight? Some weird combination of the three? Unfortunately, the novel ends before questions are answered (damn you Marvel for making it a cliffhanger!). So you’ll have to buy the full set of Revival graphic novels to find out what happens.

If you enjoyed Michael’s revival, you can find the rest of his work right HERE on Sci-Fi Bloggers. You may also check out his personal blog over HERE.