Medieval II Total War was released in 2006.  It is a turn based historical warfare game that also allows the player to control his/her units in real time battles.  Since it’s release however, there have been many mods for the Total War games.  One such mod is The Third Age.  This mod completely converts the game into Tolkien’s Middle Earth.  Rather than playing as England, France, etc, now you can play as Gondor, Mordor, the Dwarves, Dale, Isengard, the Free Peoples of Eriador, the High Elves, the Silvan Elves, the Orcs of Gundabad, the Orcs of the Misty Mountains, Rhun, Harad, and Rohan.

The latest edition of the Third Age is version 3.2.  This version is substantially better than the previous versions and is incredibly easy to download as well.  As long as you have Medieval II Total War and look it up online, you shouldn’t have any difficulties getting it to work.

Like the game it’s based off of, The Third Age is a turn based strategy game where you move armies and manage your cities and castles.  You can use armies to siege enemy settlements and expand your lands, or defend strategic castles, towns, or chokepoints.  When two or more armies engage, you are able to either autoresolve the battle, or enter the battle map and command your forces.  One fun thing about The Third Age is that, in addition to the standard battle maps, it also has custom settlement maps, such as Minas Tirith, pictured below. 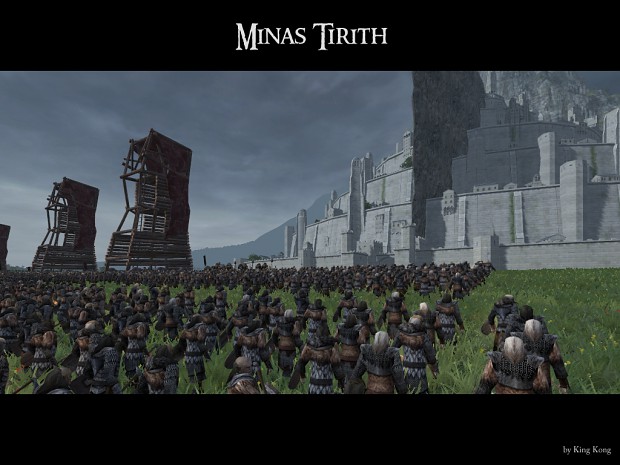 As you can see, it’s possible to have extremely large scale battles, which are always a lot of fun.  The battles are realistic and units get bonuses when attacking opponents from the sides and rear.  Archers can cause friendly fire damage if your units are too close to the enemy.  It’s a rewarding tactical and strategic experience.

If you’re a Lord of the Rings fan then you have to play The Third Age.  It contains everything that LOTR junkies could want, from special settlements and units to Heroes.  It’s a lot of fun to do things that happened in the movies and books, such as attacking Hornburg Castle with Isengard or Storming Osgiliath with Orcs.  It’s just a lot of fun.

I will warn you that the game is not balanced.  The world is essentially divided into two sides, good against evil.  The side of good is much, much stronger than evil.  Gondor, Rohan, and the Dwarves are powerful right from the beginning, and the two elf factions have incredibly powerful units.  Working with Dale and the Silvan Elves, the Dwarves can crush Rhun and both of the orc factions very quickly.  Gondor can pretty much do what it wants, because it’s just that powerful.  Rohan can annihilate Isengaard in several turns if it really wants to.  Harad and Mordor are the only two powerful evil factions, and they have to go through Gondor and Rohan to really do much.  If you want more of a challenge, play and evil faction.

There are a few things you will need to do in order to make the game fun.  There is a corruption script in the game that causes cities at any distance from your capital to have massive amounts of corruption that will drain over half of that settlement’s income.  This makes it impossible to manage any kind of economy.  I suggest looking up how to change this (I believe it is in the preference file (.cfg)) and changing corruption to around 5% (.05).  Another thing you might want to get rid of are a few scripts that the AI runs.  One is to spawn free units anytime you attack certain settlements.  Another is that they can automatically conquer rebel settlements.  Another gives them free armies of elite units when they are determined to be “weakened”.  Just look up information for it online and it’s not hard to do.

Despite needing to change a few things, I’ve had a great time playing this mod.  It is well made for the most part and has plenty of replay value.  Plus it’s free, and  Medieval II Total War is very cheap.  You can get the gold version (which includes the kingdoms expansion you need) on Amazon for 10 bucks.  I would highly recommend getting a copy, as even the vanilla version is a lot of fun.