Written for the screen & Directed by Joss Whedon.

Right at the time when all the superhero origin stories and sequels or reboots were threatening to grow stale, The Avengers came out and greatly rewarded everyone’s time, money, and, most importantly, their patience. This was the movie which, by way of its success or failure, would color the whole foundation painstakingly built up through several mega-budgeted blockbusters and, having already digested so many appetizers of varying quality, shrewdly serves us our entrée from the word go.

The plot is fairly simple. Loki (Tom Hiddleston), having survived his fall into galactic nothingness at the end of Thor, descends upon Earth and captures the Tesseract, the device being fought over in Captain America: The First Avenger. With the world on the brink of an alien invasion as a result, Nick Fury (Samuel L. Jackson) calls upon all the heroes we’ve come to know in order to save the planet. Unfortunately, their clash of egos threatens to be an even more insurmountable obstacle than the army of aliens at their doorstep.

The team-up movie isn’t anything new. Sure, this is the first time we’ve seen it done on a scale like this, marrying four distinct superhero identities and tones into one big adventure, but there’s nothing truly separating this, structurally speaking, from a television pilot stretched to accommodate a two-hour and fifteen run time. I mean this is in a good way, too. 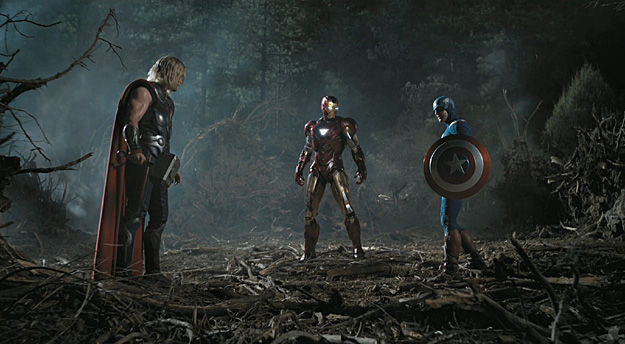 Instead of getting bogged down in the backstories of each character, we see them forced to interact in ways that reveal their personalities far better than any exposition can. And, despite the fact that certain aspects of the plot might be lost on those who hadn’t seen the earlier movies, it doesn’t really matter because the writing does such a great job of keeping in the spirit of what a fun summer action movie should be like: filled with great one-liners and big moments.

If there was something I could point out that doesn’t hold up quite as well on subsequent viewing, it’s that it all feels incredibly slight. The immediacy of the story is a double-edged sword in this instance. The movie is preoccupied with setting up the threat and getting the band together that it doesn’t really have time for much else and, once it’s over, there isn’t much of a lasting impression being made.

Thankfully, the actors bounce so well off of each other that the movie can rightfully be considered an action-comedy that just happens to cost over two hundred million dollars. Looking at the movie through that lens, it’s an unqualified success. Robert Downey Jr. gets the lion’s share of big laughs, but everyone has their time to shine. You know something’s going right when even Thor (Chris Hemsworth), an endearing, yet one-dimensional, oaf in a previous movie, has time for a few choice one-liners.

I went into this whole Marvel Month Madness with the notion that I’d have the most to say about this one. Turns out, this just might be the shortest article yet. That’s probably because The Avengers is simply tons of fun, far better than I ever could have possibly expected prior to its release, but will likely be remembered more as a turning point in how big “franchise” movies are developed than as anything with intrinsic value.