Writer’s Note: In the last article, a review of The Avengers, I misprinted the year the movie came out as 2011, and not its actual release year of 2012. I apologize for any personal harm this may have incurred upon any of our readers.

Now, on to the review…

Writing about this movie for the second time, I’m wary of going into too much detail on what I liked and didn’t like about the movie. In short, I feel it’s an entertaining adventure with some very clear foibles and, while I got the normal bit of embarrassment looking at my writing from two years ago, for the most part I feel that opinion remains unchanged. Instead of a standard review, then, how about some of what I feel doesn’t work about the movie?

The basic question at the heart of this sequel comes as a result of one posed by Captain America in The Avengers. In the midst of a heated argument he asks Tony Stark something along the lines of, “Take away the suit and what are you?” Iron Man 3 begins and ends like it wanted to explore this topic, but, based on the finished product, it comes off feeling like just a pretense.

We pick up with Tony Stark (Robert Downey Jr.) at arguably his lowest point. After saving the day at the end of The Avengers by going through the wormhole into space and coming back out, he’s having trouble sleeping and spends all his time making more and more Iron Man suits. When his best friend and former bodyguard, Happy (Jon Favreau), is caught in the middle of a mysterious explosion and barely makes it out alive, Tony lobs a challenge at the man taking credit, The Mandarin (Ben Kingsley), with revenge on his mind. Meanwhile, a related technological advancement called Extremis, spearheaded by Aldrich Killian (Guy Pearce), causes Tony some trouble. 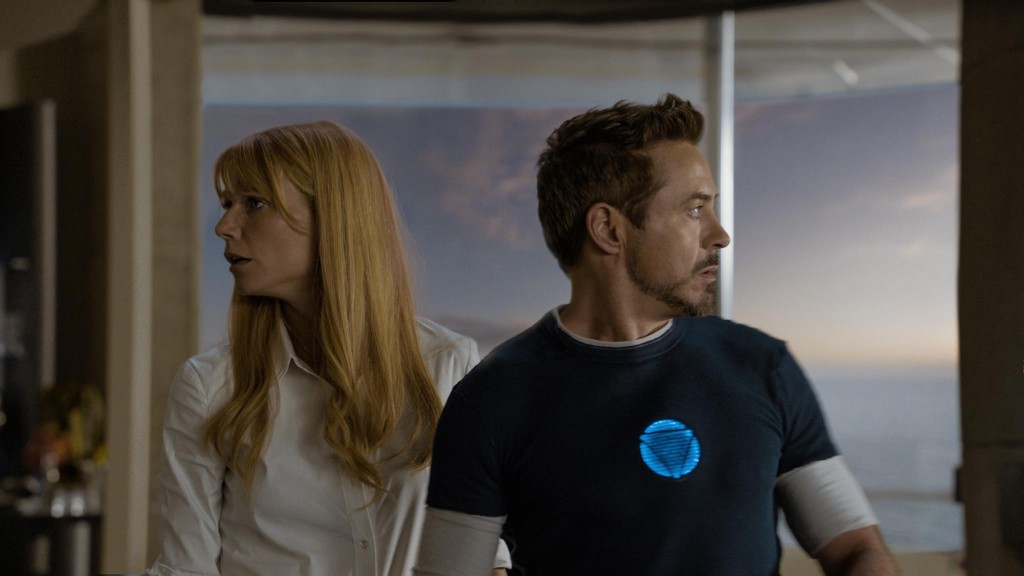 While Iron Man 3 is a suitable sequel to Iron Man and The Avengers simultaneously (enough that I wish Iron Man 2 didn’t even exist), the need for a big action climax feels at odds with the very dilemma Tony faces, whether it’s the suit that makes the man or the man that makes the suit. The movie wants to fall on the side of Tony Stark being Iron Man whether he’s in the suit or not and, for a while, it pulls it off very well.

Early in the movie, his house is blown up, along with, presumably, all his suits except for one. Declared dead and without many resources at his disposal, Tony must rely on an unfinished prototype suit and, ultimately, has to construct his own homemade weapons to get to the bottom of the Mandarin’s scheme. This is all well and good, as I really enjoy montages of Tony Stark building machinery and using them to his advantage, but this goes out the window once we get to the finale and the movie has Tony enacting the illogical “House Party” protocol to fight all of the Extremis mercenaries.

Simply put, this is a late story development where Tony calls all of the Iron Man suits from the wreckage of the Stark Manor to his location so they can fight the Extremis mercenaries to make the big, dumb climax possible (although, I’ll admit, it sure beats the ones in The Incredible Hulk, Iron Man 2, and even the first Iron Man, regardless of my liking that movie more than this one). I understand that these are essentially action movies aimed for all audiences, and a psychological character study can potentially alienate large pockets of them, but was it too hard to stick to their guns and have Tony & Company save the day with minimal resources?

It feels illogical that he wouldn’t put this protocol into place in the beginning, when his house was under attack by terrorists. From a story perspective, we already saw his suits destroyed, so bringing them back at the end to fight, just so he could make the decision to blow them after the day is won to spend more time with Pepper, feels a little hollow. This is especially apparent when you consider he’ll just be back in the suit again in time for The Avengers: Age of Ultron. Speaking of hollow gestures, while we’re at it, Tony’s line that ends the film, where he claims that he’s Iron Man no matter what you take away from him, can’t help but lack the necessary impact because of that whole finale.

Iron Man 3 is a valiant attempt at bringing things back down to a manageable size following the big team-up movie (don’t let the two hundred million dollar price tag fool you). It’s like Marvel is trying to keep their properties “pure” of potentially dangerous compromise in the midst of their unparalleled success, so they use their biggest character to convey such a message. Iron Man 3 wants to be a story about a mechanic questioning his self worth beyond his creations, but this is compromised by the notion that certain expectations be met, ones that don’t favorably serve the narrative. Watching all of these movies in sequence, that seems like the lowest common denominator here.

Next Up: Thor: The Dark World.