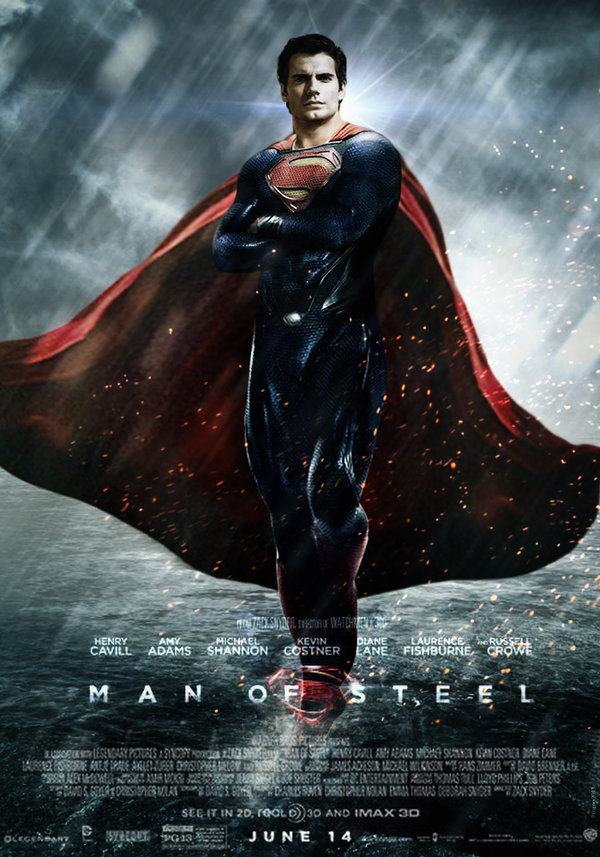 The Superman film franchise has floundered since the days of Christopher Reeve. Despite the hero’s universal appeal, finding the right mix of ingredients to emulate the miracle of Reeves’ performance has never gained any real success. It’s a lofty challenge, not just the powers or Superman’s humanity, but the suspension of disbelief on the part of the audience: to accept a universe that includes a man who can fly. 2013’s Man of Steel is the latest film to try their hand at it.

The problem with Superman is always the problem with Superman: he’s too powerful. A man who can destroy a planet by sneezing too loud doesn’t have many peers, much less an opponent with a realistic chance of challenging him. Man Of Steel seeks to correct the problem by offering General Zod, a longtime Superman enemy and fellow Kryptonian, as the antagonist. With Zod, Superman finally has a chance to show off his powers to the fullest without the stigma of ridiculousness that haunted previous entries.

It’s the way the film portrays those battles that causes concern. Battles with ultra-human beings are nothing new. The Dragon Ball Z anime has made a career of planet-wide battles. However, Dragon Ball Z appointed a rule that Man of Steel ignores: battles take place in unpopulated areas. Man of Steel finally gives us battles fitting with the vast powers of its combatants, but literally destroy both Smallville and Metropolis in the process. Now the sequel will have to deal with the angry populace. It’s literally taking one step forward and two steps back.

I have a problem with the total disregard of the secret identity. The film made it pretty clear that Smallville knows about Clark’s powers. Saving children from a sinking bus is good, but exposing your powers in the process is a big no-no. Worse still is how little the script respects that move. Johnathan Kent dies during a tornado, and Clark does nothing to save him. None of the townspeople, all of whom (the audience has to assume) have conveniently become stupid enough to forget the sinking bus, make a peep of Clark’s powers. They forget about it for the sake of emotional impact. Hell, Superman freely volunteers his age and where he grew up to the military, his main hurdle in establishing himself as the world’s official guardian. Does he honestly believe that no one will figure it out?

The problem with Superman is always the problem with Superman: the attempt to cast his powers in the appropriate scale flounders. Here at last are battles where the full use of Superman’s powers are portrayed. There’s even a villain who can keep up with him. However, ignoring common sense to create said battles is a weakness of the script that no amount of acting can hide. The movie’s actually pretty good. The cast does a remarkable job for a superhero movie. I just wish it didn’t saddle Superman with unnecessary consequences.

If you enjoyed Michael’s piece, you can find the rest of his work right HERE on Sci-Fi Bloggers. You may also check out his personal blog over HERE.