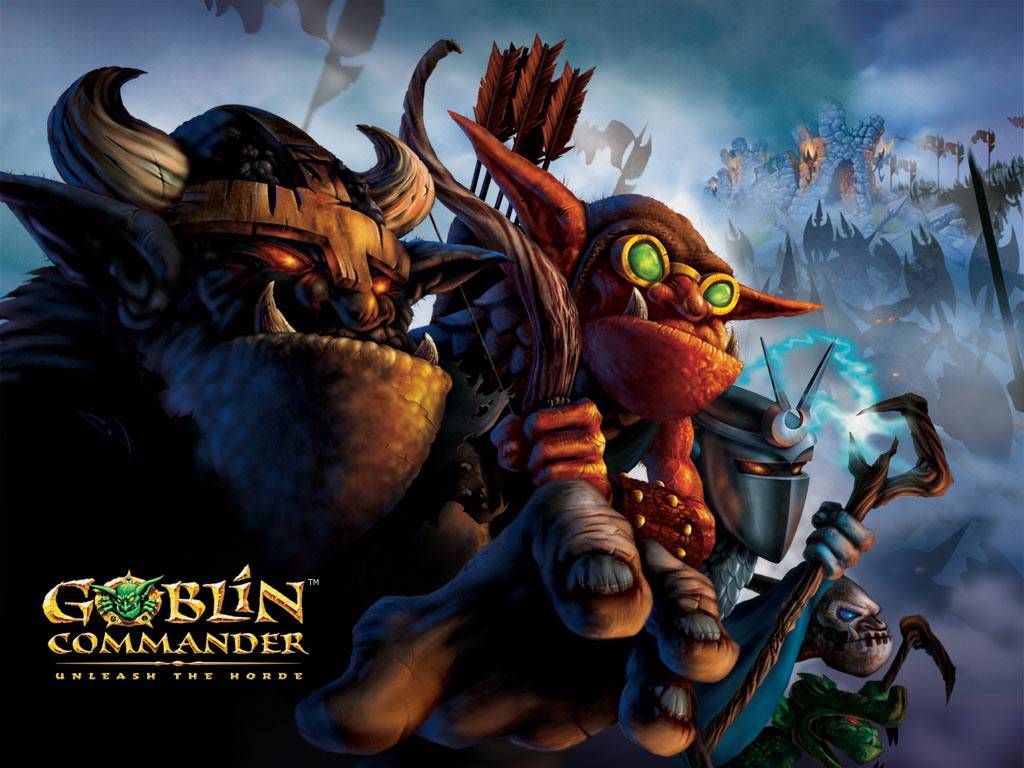 Goblin Commander: Unleash The Horde was released in 2003 for Playstation 2, Xbox, and Gamecube.  It is an RTS game with a few action elements thrown into it as well.  In the game, you operate as the protagonist Grommel, one of the leaders of the five goblin clans created by their master Fraziel.  In the beginning of the game Fraziel is betrayed and killed and it is up to Grommel to find out who did it.

In the game, you will have a house for each clan currently under your control, up to a maximum of three.  There are a total of five clans in the game, and each one is strong against another clan and weak to another.  (The arrows will indicate a strength over the clan they point to Stonecrusher→ Hellfire→ Nighthorde→ Plaguespitter→ Stormbringer→ Stonecrusher)  Each clan house allows you to recruit from the five units and available to that clan, as well as purchase the three upgrades available to them.  The other building you will have access to is the Hall of Titans which will allow you to build the turret available to each clan you control (up to a maximum of three turrets may be built) as well as the extremely powerful titans, of which one is available to each clan.  These massive units are where the action component comes into the game.  You can take direct control of these beasts to do massive damage to the opposition.

Mostly however, the game is a standard RTS.  There are two resources for you to collect, souls and gold.  Souls come from soul fountains mainly, which as long as you control them will supply you with a steady stream of souls that you can use to recruit more goblin warriors.  Over time these soul fountains will provide you with less and less souls so be careful.  Gold is a finite resource.  At the beginning of the game there is only so much much of it on the map in the form of objects that you break in order to get gold.  Gold is used to buy upgrades, turrets, and unlock units, though this differs for each clan.  Gold is also used to repair and rebuild your structures.  That is why gold is important.  You won’t lose the game until all of your structures have been destroyed, you don’t have the gold to repair them, and you don’t have any goblins.

So how do you go about destroying the enemy?  Due to the ability to cheaply repair your buildings, this game almost always becomes a war of attrition when playing against a human opponent in the skirmish mode.  Against the computer, you will have to wear them down over time as well, as they will have a lot more troops and souls at their disposal than you will.  The best strategy then is to, as quick as you can, to get a small force of troops and march them around the map destroying everything you come across to accumulate as much gold as you can.  I recommend Stonecrusher from this.  Spend some gold and unlock the Pitboss and Drummer in the beginning.  Then, make a team of two miners, two rock throwers, a pitboss, and a drummer.  This team will able to destroy structures it comes across quickly, while also being able to defend itself against small enemy forces.

Once you have some gold, set some waypoints for your troops so that they don’t stop destroying things and then set a full set of ten units to defend your base.  Putting them with a turret is a good idea.  I recommend using Stormbringer for this.  Unlock the Ice Mage and Wind Mage as quickly as you can and upgrade the wind mage’s defense ability to max.  Then recruit 9 ice mages and 1 wind mage and you have a force that can stop most attacks, especially if supported by a turret or two.

After you have this set up, it’s best to just take your Stonecrusher units around, getting as much gold as you can and capturing as many soul fountains as you can until they die.  Your main objective is to get more gold than the opponent.  Deplete his side of the map’s gold and once he runs out, he loses.  Try to maintain over 100 gold at all times in order to reconstruct your buildings and when you do attack, attack with everything, 30 troops and a titan.  For attack, it is best to use 9 pitboss’, 1 drummer, your 9 ice mages and wind mage, and whichever other clan works best for you, same with titans, though the Stormbringer Lightning Elemental is a good choice.  It is also possible to spawn turrets inside the enemy base once you break inside to help with your assault, which I recommend.  If you can hold your units in his base and destroy his buildings, then you can destroy them again every time he tries to rebuild, effectively shutting him down.

Just remember to play slow in this game.  It is rewarding to have a bank of souls and gold to use in emergency situations.  However, don’t forget to upgrade your units, as this can easily be the difference between victory and defeat.  Don’t over-extend yourself and find yourself running out of souls, as that will quickly lead to you being unable to summon reinforcements to defend your base or keep up pressure on the enemy.  Whenever there is a lull, don’t sit on your hands, go looking for more gold and soul fountains to capture.  As for runes, they can make a huge difference in battle, so make sure to get the most powerful ones whenever you can.  Earthquake and the armor one are good choices.  Good luck!