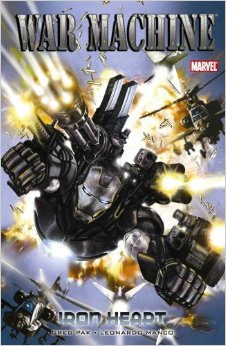 It’s a post-Civil War world. Captain America is dead, and his fight against the Superhuman Registration Act (a law that would force superheroes to reveal their secret identities and submit to governmental “training” and “supervision”) is over. Tony Stark, leader of the pro-Registration forces, has voluntarily entered a vegetative state to keep the locations of Captain America’s allies out of the wrong hands. Norman Osborn, ruthless CEO of Osborn Enterprises (and a giant thorn in the side of many a Marvel superhero) rules over SHIELD (one of Marvel’s most powerful international law enforcement agencies) with an iron fist. And now another hero has fallen. James Rhodes, Stark’s best friend and the hero War Machine, has suffered devastating injuries.

There is some hope. To save his life, Rhodes’ body was augmented with cybernetic components. The Iron Heart graphic novel sees Rhodes on a mission to save a woman he’s secretly in love with but never told her. The question is, is she worth it? More importantly, is Rhodes even the same man?

It’s customary for heroes to forbid themselves from killing their opponents. However, Rhodes is a soldier first and a hero second. He has no problem using lethal force when necessary, though his collision with other Marvel heroes has him toeing that moral line. In Iron Heart, he not only crosses that line but makes his home there. His computerized mind is to blame: with his brain hooked up to a miniature supercomputer, Rhodes sees everything at once. He sees the videos of villains’ debauchery. Every televised murder, every public execution, every legal loophole, is Rhodes’ to cherish. When faced with this mountain of the evil, all questions of morality goes out the window. Violence is no longer just one of many solutions to put the bad guys down. It’s the only solution.

Rhodes’ new cybernetic abilities also have psychological consequences. His cyborg body is capable of merging with any mechanical construct. There’s this one scene where Rhodes’ limbs have been blown off. Not to be outdone, Rhodes harvests various pieces of hardware to become a walking tank. He literally has tank treads for legs. So Rhodes is able to push himself harder, ignore otherwise catastrophic damage, because of his assimilation ability.

Yet it’s Rhodes’ very human heart that puts him in the line of fire. Rhodes embarks on a mission to save childhood friend Dr. Glenda Sandoval, for whom he has feelings…except that she doesn’t seem worth rescuing. Sandoval’s debut in the comic has her at twelve years old, “punishing” ants by using a magnifying glass and focused sunlight to burn them alive. I don’t know about you, but a child burning ants alive for fun, let alone some twisted version of revenge (for a butterfly!), would be a deal-breaker for me. Perhaps having a front-row seat for all the bad things the bad guys have ever done makes Sandoval look like a princess.

It was a dark time for the Marvel Universe. Heroes have fought heroes in order to answer a question of morality and possible victim preservation. When the dust settles, it’s a world where the villains have power to do as they see fit, and the heroes must survive in order to have a say in this new world. James Rhodes, best friend of Tony Stark and wielder of the War Machine armor, is no different. The question is, at what cost? I don’t know. That’s what scares me the most. 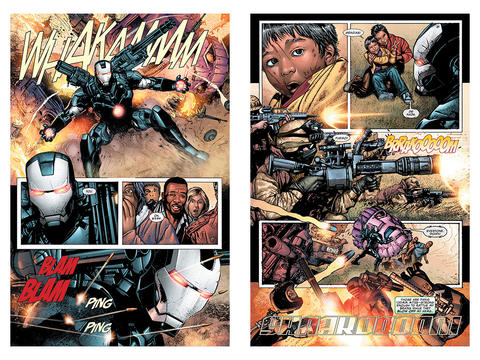 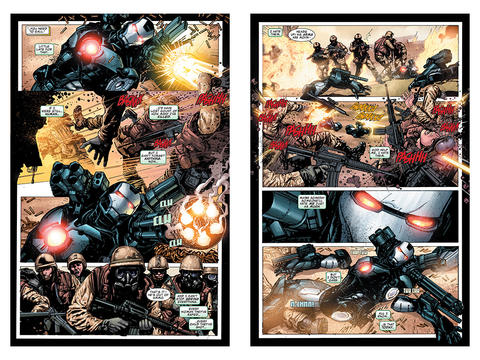 If you enjoyed Michael’s war, you can find the rest of his work right HERE on Sci-Fi Bloggers. You may also check out his personal blog over HERE.