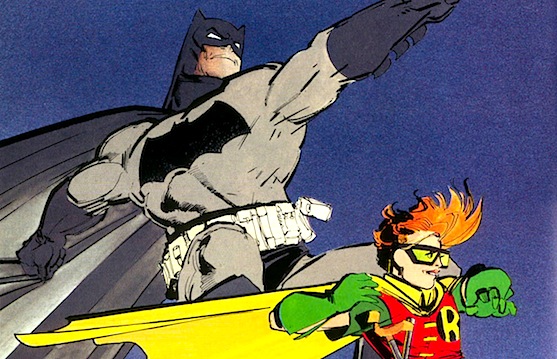 Frank Miller’s The Dark Knight Returns is ground-breaking for many reasons. It was the first comic book to describe a world where the boundaries of right and wrong aren’t so easy to distinguish. It proved that comic books could tackle serious issues like racism and prejudice. It made our heroes real people, dealing with imperfection. Nowhere is this more apparent than the book’s conflict between Batman and Superman.

The Dark Knight Returns reveals a basic truth: Batman and Superman don’t make sense as allies. It’s all a matter of perspective. Superman is an optimist through and through. He believes in second chances. He believes in government as the upholder of civilization. From his view, flying in the air, everything is perfect. You can barely see the evil

Batman doesn’t have this. He deals with crime on the street. Every day he encounters criminals who throw away chance after chance at rehabilitation. There are no second chances. And he knows all too well that the government will not help (unlike Superman, whose vital moral code has him working within the law). This mindset, the official and the unofficial, the sky versus the earth, is ultimately responsible for two favored superheroes coming to blows.

Batman and Superman would’ve been good allies because they share the duty of protecting the world. But in The Dark Knight Returns, that world no longer exists. The new world is a cesspool, a place where truth, justice and the American Way are forgotten ideals. Superman, that optimist Boy Scout, blindly plods along with the government because that’s what he’s supposed to do. He’s a dog on a very short leash. He only sides with them because he simply will not operate outside the law. 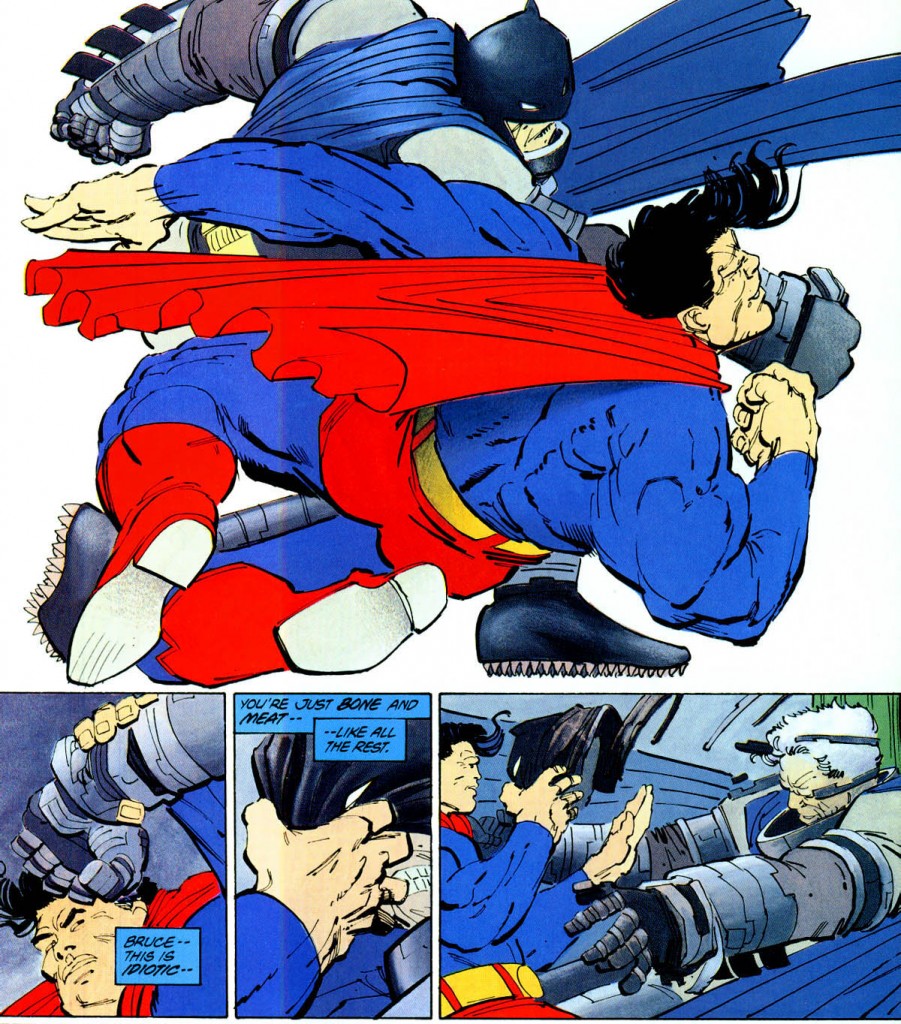 Batman is a fascinating look into the line separating dedication and obsession. For years it’s been fan nomenclature to assume Batman, not Bruce Wayne, is the dominating personality in the Dark Knight. Bruce Wayne’s merely a disguise he puts on to fool the public. But with his Batman life over, Bruce Wayne has nothing to do. He spent so many years behind the cowl that he doesn’t know how to be anyone else.

The same guilt that forced Batman to retire (over the implicated death of Jason Todd, the second Robin) is what drives Batman to betray his morals. His tactics, while non-lethal, have done nothing to stem the violence plaguing Gotham. He concludes that his vow not to kill has been holding him back and responds appropriately. While Superman is incapable of change, Batman has changed too much.

Frank Miller gave comic books new depth by analyzing a darker world, a world where civilization hangs on the promise of compromise, sacrifice and omnipresent authority. It asks how one can really hope to distinguish Good from Evil in a world where heroes don’t exist. Like any good question, it’s up to the reader to make his own answer. By forcing readers to think in new and complex ways, Miler ultimately elevated comic books into literature.

If you enjoyed Michael’s return, you can find the rest of his work right HERE on Sci-Fi Bloggers. You may also check out his personal blog over HERE.