This is a sponsored post written by me on behalf of NJOY. All opinions are 100% mine.

Okay, I read Facebook a lot, Twitter, Google+, etc., so I pretty much know you guys as well as any magazine, online or otherwise, should know their readers. I’d like to know you a little better (CONTACT US), but as of now, I think I’m doing okay. Now, why am I bringing this up? It may not seem obvious, but read that first sentence again. Yeah, now you get it. I know how that sentence can make people feel. It generally brings about feelings of distrust. “Oh, this fella’s in it for the coinage all right.” It shouldn’t incite such feelings, but, more often than not, it does. So how do we overcome this obstacle? How do we get to a point where simply look at something for what it is rather than what we think it is? Why, we get the Editor of the site to write an opening paragraph that addresses the elephant head on instead of dodging it with “clever writing” or cheap tricks of that sort. Get the idea? That sound good? Yes, no? Well, knowing you, I’ll assume you’ll make an intelligent decision based on what you’ve read thus far. If that happens to be the decision to continue reading, then please allow me to repeat the opening line in a new manner.

This is a sponsored post written by me on behalf of NJOY. All opinions are 100% mine. 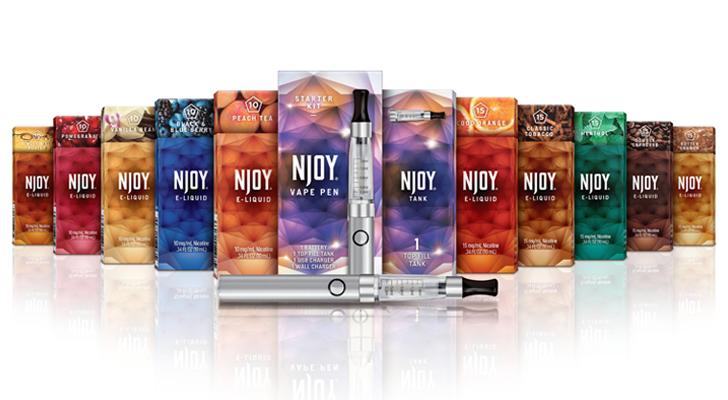 Here’s what you’ve got to understand: we get a lot of requests by email to get things on the site. So, when we get behind something, there’s usually got to be more to it than just, “Hey, here’s a product. You do sci-fi. It’s ‘slightly’ futuristic.” Well, in NJOY’s case, there is. NJOY is America’s largest independent e-cig and vaping company. For those of you who don’t know the terminology, vaping is to e-cigs as smoking is to regular cigarettes (e-cigs being “electronic cigarettes,” again, in the event that anyone is unfamiliar with the term). Essentially, NJOY has decided to take on a bold task with their vaping products. Rather than simply weaving their way into a niche market and capitalizing on it, NJOY’s mission is, and this is a direct quote from their site, “to obsolete combustible cigarettes completely.” I don’t know about you, but in my opinion, that’s some forward thinking right there. And if they actually did it, the future really would look a lot brighter.

Just to give you an idea of the impact this sort of thing would have, if it became as mainstream as intended, take a look at how many cigarette butts you find lying on the street/sidewalk/most everywhere you go in big cities, or even medium-sized ones. Now, make all of them vanish. What a clean world. This is off the top of my head, folks, and I got to you, I’m likin’ it. That’s just one major shift the success of NJOY’s mission could lead to.

Okay, now I know a few of you are probably smokers yourselves. If you’re feeling a little doubtful about the e-cig products, check out these flavor tests out in the field and see what you think.

Honestly, the best way to help the planet is to make doing so enjoyable, and I think #NJOYVape really gets how this is done. If you’re interested in any of their products, I’d suggest checking out their site: NJOY

Before I head out, I’d like to know how you, as readers, feel about your past experiences using/being around e-cigs. Let me know in the comments below, SERIOUSLY!

That’s everything for now! Catch you later, and enjoy NJOY!