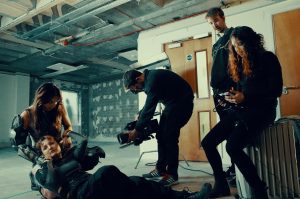 E.V.A. Is Coming: Prepare For The Fight

With the dreams of the future always tempered by the concerns of our current world, we look to the skies as an escape, but what happens when we aren’t there yet—and the world will not wait for us to scurry off its corpse?

Well, you get dark science fiction. Specifically, you get a new series by an old writer here at Sci-Fi Bloggers, now gone on to make science fiction of her own. It is with great pleasure I introduce a teaser of Alice Rosso’s video adaptation of the comic E.V.A.

And, while I am at it, here’s the artist herself, at least in written form. I had questions about E.V.A., and, as expected, she gave me some excellent answers. Here’s the interview.

What made you decide to adapt this specific comic? What made it stand out to you over the thousands of other science fiction comics you might have chosen?

I basically stumbled into E.V.A. and I like to think about it as destiny’s plan. I had been invited to the London Comic Con 2017 and, even if I enjoy comics and their Film and TV adaptations, I have never been a massive comic book nerd. However, when I was at my friend Marco Turini’s stall, I was going through his amazing drawings and couldn’t help but stopping on E.V.A. What made her stand out for me, first of all, was the fact that this woman, for once, is a real badass; I am tired of the modern representation of heroines, with their slim bodies, perfect lipsticks, and gentle features. E.V.A. is a fighter who’s been through some real sh*t, and it shows; she is damaged, she carries the scars of her battles proudly, and most of all, she looks like she could actually hold a gun without dropping it because it’s too heavy.

Then, when Marco told me about the world she lives in, this dystopian underground society, the parallel with the Dante’s Inferno came instinctively to my mind (finally my classical studies serve me!); humans are responsible for destroying the planet and like damned souls they have been thrown into hell to pay the price of their sins. And now this incredibly complex and fascinating woman has to rise to become a goddess and save humanity. All this with a Cyborg arm and leg; isn’t that like the coolest thing ever?

How is this project different from others you’ve worked on previously? Have there been any unique challenges to this project so far?

I have always been attracted to dark stories and how far men are willing to go for their survival, wanting to investigate the human soul with its shades and flaws, the real evil hiding deep within us, but I chose different genres like Horror and Dramas to do so.

With E.V.A., I have the chance to explore the same thematic but with much more creative freedom. This brings a lot of opportunities; how exciting creating a whole new world, with new rules, different powers coming into play and fascinating characters! But, obviously, even bigger challenges follow; I want this to be a sci-fi that looks plausible and rooted in real life. My references are films like District 9, Elysium, and Children of Men, that explore real stories and real drama, in a sci-fi setting. Therefore, the challenges come not only from the story but also in the practical actuation of it. I am very lucky to be working with incredibly talented people like Jack Cave, who did the prosthetics for E.V.A.’s cyborg arm and leg, and Francesca Prizzon, who, through incredibly detailed costumes and production design, brought to life the whole world of Genys.

E.V.A. is a very ambitious project that requires a group effort and a lot of time (and I don’t do patience really well); thank God I am not in this alone!

With the focus lately on inclusive representation and stronger female characters, how do you think E.V.A. fits into that conversation?

E.V.A. not only fits perfectly into the conversation, but I think it also brings it to the next level. It’s true, there are so much more female strong leads and I think it’s beautiful seeing how these heroes are inspiring women all around the world to rise and be brave. However, I feel they still carry a “commercial touch”; these women are all incredibly beautiful, kind and possibly sexy; they represent the “good” in the story and it shows in the way they look. E.V.A. instead looks like the monster, like a damaged creature who carries with her baggage, darkness, and scars.

At the beginning, she is driven by instincts like revenge, frustration, and thirst for blood; all very natural emotions we, as human beings, often experience in our life. They might not be as inspiring and pure, but they are real. Afterwards, the way we deal with them and direct them towards the right outcome makes us who we are. On the contrary, the “bad guy” of the story looks like a totally ordinary man; and that is what really scares me, not the monstrous creatures under the bed, but the real monsters hiding behind normal appearances, trustworthy looks, and lies.

Moreover, I couldn’t choose a better person to bring E.V.A. to life than Haley Bishop; she’s a real, strong woman, who is trained in combat arts and have real muscles on her body. And guess what? I think she’s one of the most stunning and feminine women I ever met. This is how I want to inspire women; by showing them that being a REAL hero can make you proud, strong and beautiful.

There have been quite a few stories about dystopian and dark future societies in media, what sets E.V.A. apart from the competition?

I think E.V.A. sets apart from the competition thanks to its roots in contemporary times. Nowadays we’re getting closer to destroying our planet, but, still, space is way too distant; what will we do when there’s nothing left? I think we would dig deeper. By taking for references Neil Blomkamp and amazing films like District 9 and Elysium, I want to try to bring even more reality to the sci-fi world; E.V.A. deals with real struggles, real people facing real problems, but set in a not-so-distant future.

What aspect of the series are you most excited about sharing with your viewers? What was the most fun part so far in its creation?

Besides the incredibly badass E.V.A., the world of Genys is populated by so many more amazing characters. When I decided to draw a metaphor with Dante’s Inferno, not only I took as reference the Infernal Funnel for the 4 levels society of Genys, but I also embraced its characters (which, for those who don’t know, are A LOT!). From then on, I started creating the characters I needed to drive the story but giving them characteristics and traits of the ones in Inferno. This allowed me not only to have a really useful set of archetypes, which, history tells, already works pretty well but also to modernize them and add my own vision to each one of them. And when it comes to casting, that’s real fun!

You can check our website www.evatheseries.com , where you can get in touch with the productions involved so far, Five Fifty Five Production by the super badass Kate Baxter, and Bish Media by lead actress and producer Haley Bishop. These two are one of the most driven, professional and inspiring women I’ve ever met, and I feel so lucky to have them to support me. Just drop us an email, we’re nice people!

And, most importantly, where can we watch it once it’s done!?

On the best buyer’s platform! Kidding. I see E.V.A. on platforms like Netflix, Hulu or HBO, or any distributors that are not afraid to deliver bold content. E.V.A. won’t be adult-only, but it contains quite a lot of violence and characters making questionable decisions; my aim is to show the real dark side of human beings and I hope to find someone who supports this vision without putting too many boundaries but instead inspiring my creativity by trusting me with more range of freedom. 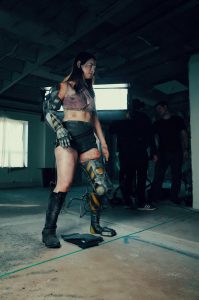 Excited yet? I’m, personally, a huge fan of Dante’s Inferno, and I look forward to seeing how E.V.A. puts a sci-fi spin on such an old tale. So, if you are interested too, then stay tuned for an adventure underground—but hopefully getting higher. Once it releases, you can bet we’ll have an article to tell you all about it, right here on Sci-Fi Bloggers.

*Interview answers have been altered strictly for formatting purposes and to correct grammar errors or typos.