Premise:
The Doctor is a time lord. He travels through time trying to save humankind from aliens and from themselves. The Doctor in this season is played by the incomparable David Tennant. He is an alien himself and the last of the time lords. He travels around space and time in the Tardis a blue police box. In each season he has a companion. Some of them carry over to the next season and some do not. This season the companion is Donna. She had been his companion previously and met back up with him when they were both investigating Adipose Industies. They end up traveling through space and time and battling aliens again for the remainder of the season.

WhatÂ´s Good:
David Tennant brings new life to the Doctor that he sorely needed. He is a wonderful actor and a welcome addition to the long list of regenerations of the Doctor. Donna Noble is played by Catherine Tate and she herself is amazing with outstanding comedic timing too. 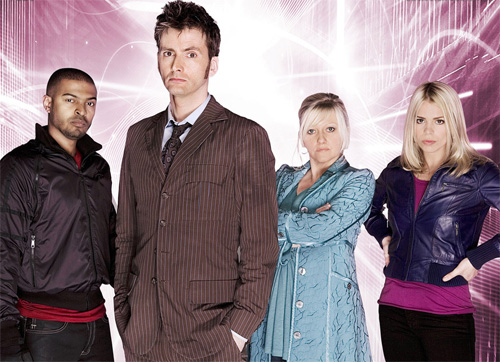 The Not So Good:
About the only thing that I can find to say here is that John Barrowman (who plays Captain Jack Harkness, an erstwhile companion) was not in near enough episodes.

Overall:
Doctor Who has been on the air since the 1970â€™s. No show could last that long if it was not outstanding. There are aliens from the past episodes brought back again with new imagination. The Tardis has changed very basically over the years and is still a wondrous machine. The Doctor in all his regenerations never gets boring. The change in companions helps keep the show fresh as well. This is a fantastic science fiction show that everyone should watch at least once. Once is all it will take to get you hooked.