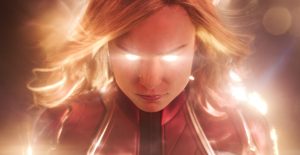 I don’t get the Captain Marvel controversy. The internet’s reaction to this film was just a curiosity before I’d seen it but now is just abjectly confusing. I’m putting a line in the sand here and stating that the movie is fine, not fantastic, but fine, fun, and not worthy of everyone getting all touchy about it.

We’re not going into the political aspect here—but the movie doesn’t even have much of that, anyway, so I still don’t see the issue.

But let’s talk about the movie on its own merits here. What’s Captain Marvel really like as a film? Well, it’s a buddy cop movie with Nick Fury and our new snarky semi-alien hero. It’s a retro-sci-fi movie with a different look at the Marvel universe than most of the others in the film franchise. That rapid and drastic change from formula results in not something necessarily better or worse than any of the less mind-meltingly excellent Marvel movies, but I’m happy it exists. It’s there with, say, Iron Man 2, or Thor: The Dark World. Just some fun with superheroes. The comedy is a little juvenile and the plot a little less gripping than some, but not uninteresting at all.

I like seeing Marvel do different things with its plot and brand. Those alien cultures are a little different from anything else we’ve seen from the movies. One is, apparently, a collection of different races all living under one massive A.I. leader, and the other a species of shapeshifting, memory copying, reptile aliens that are not one-note or generically parasitic.

That’s all interesting. I wish, a little, that there was more of a moral grey area shown in their conflict, but oh well.

There’s other stuff to see.

A young Nick Fury having action scenes was just enjoyable, as was Colson’s few moments to shine. You get a better feel for how competent they both are, and how goofy and likable they can be. I’m not a fan of the cat humor the whole way through, but it was certainly memorable.

Captain Marvel Has A Unique Look At Characters

But I’m dancing around our heroine. That’s because she’s not the most complicated hero. She’s got a level of snark bordering Tony Stark that is honestly not present enough for how good it is, and a no-nonsense attitude that leads to a genre-defiance moment that made me so happy to see, if not necessarily eliciting the intended chuckle. She’s wish-fulfillment, but not in the hollow sexual way a lot of female characters get written.

I think the thing to keep in mind here is that Captain Marvel is a cosmic-level hero. She’s too powerful, yes, for most earth-based stories—and that’s going to be something they must write around—but by having her in the universe they can deal with plots involving multiple Ego-level villains and characters. Adam Warlock (the gold sarcophagus shown at the end of Guardians Vol. 2) is usually also a character on that level of power, as is The Silver Surfer—assuming they ever try anything related to the Fantastic Four again.

Captain Marvel Is A Different Degree Of Superhero

She, like a lot of plot elements in these movies, is a way to bridge to that kind of stuff.

And, honestly, who doesn’t enjoy seeing villains get utterly obliterated sometimes? Sure, not all the time—but there’s a reason Spider-Man versus generic criminals is fun, and there’s a reason that Superman has been endearing for as long as he has.

While this movie itself is a little tonally weird and doesn’t explore some sci-fi concepts as deeply as I would like, it’s charming and different and fun enough that I think it’s not something to skip.

It’s a stepping stone for some incredible things in Endgame—and, in the Marvel Cinematic Universe, sometimes that’s enough.