The Age of Ultron is upon us. Well, almost. Actually, May is still pretty far away, but the teaser trailer dropped this week. Only six days on YouTube and it’s racked up almost 47 million views. That’s a ton! Perhaps it’s because the trailer is awesome, magnificent, and gloriously stunning. See it for yourself.

Yeah, that happened. James Spader’s voice, dripping with contempt, over jump cuts of haunting explosions and terrified townsfolk. Our heroes looking sullen and defeated. Jarvis taking on a new role?! How can you contain yourself?! I have actual chills.

There are so many things to be excited about. The film is taking a much darker path, possibly set by Tony Stark himself. I mean, you guys saw The Hulk fighting with a ‘roided up version of Iron Man, right? Thor didn’t look happy either when he casually grabbed Tony by the throat and lifted him from the ground. I have a feeling that Stark’s humor won’t be as prominent in this film.

Also, we finally get to see those crazy love birds from Godzilla play brother and sister. Aaron Taylor Johnson and Elizabeth Olsen play Pietro and Wanda Maximoff, and they give a good performance in the trailer. The closeup of Olsen’s gaping scream freaked me out, and the clip does a great job of confusing viewers as to where the allegiance of these twins lie. There’s a shot of them walking with Ultron, but then it looks like Pietro saves Captain America in another shot. Anyway, for the first time, I’m intrigued by the inclusion of these characters.

Did you notice the haunting music behind Spader’s voice? It’s from Disney’s Pinocchio. It’s an eerie version of, “Got No Strings”. Also, intriguing, no?!

Probably the best ending to any trailer ever as well. A drawn out closeup of a fallen Thor’s hand. Yes we’re all worried about Thor, but his lifeless fingers fall over the Cap’s unbreakable shield…cracked in half. I mean, are you not entertained?! 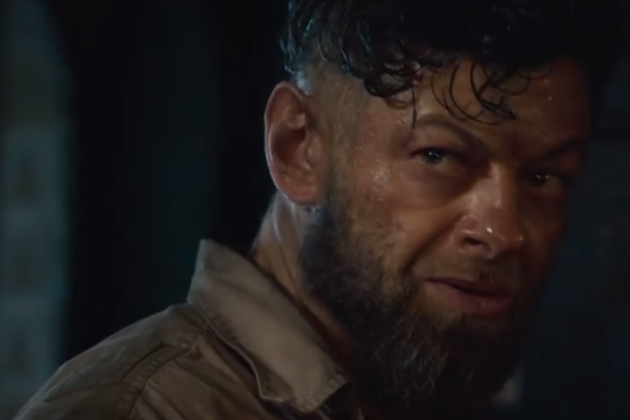