Beta (played by Ryan Hurst) is seen crawling into a makeshift tunnel made by the Whisperers on his mission to find Gamma (played by Thora Birch). Gamma meanwhile has arrived at Alexandria to tell them about the group trapped in the cave with the horde.

Gabriel (played by Seth Gilliam) and Rosita (played by Christian Serratos) don’t trust Gamma and Rosita knocks her out and has her locked up; they make it clear to Gamma she can either help them or die. Gamma tearfully admits to killing her sister and wanting to see her nephew again which marginally earns their trust. She then draws a map to the cave. Gabriel prepares to take a team out and makes it clear that since they broke Gamma, they can do the same to other Whisperers; they’re to torture instead of killing to get more information. Judith (played by Cailey Fleming) visits Gamma at her cell, finds her real name is ‘Mary,’ and asks about her old life. Gamma/Mary recounts details of her old life but confesses to not remembering much before meeting Alpha. Daryl (played by Norman Reedus) spots Alpha (played by Samantha Morton) and several Whisperers moving walkers; Daryl kills the Whisperers and engages Alpha in a brutal fight. Alpha and Daryl wind up at an old gas station critically wounded, she lures walkers in to attack Daryl. 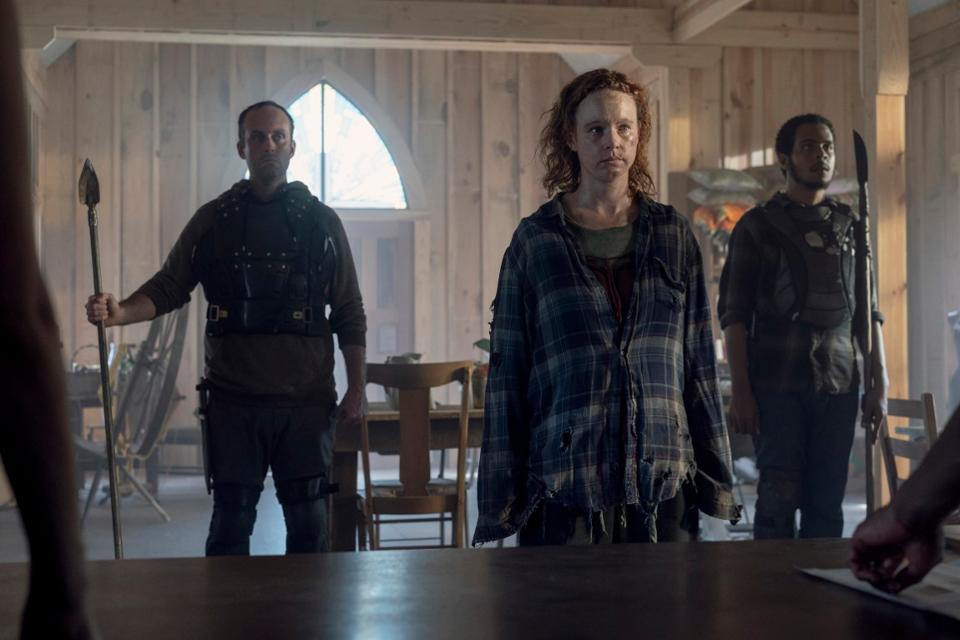 Even if they grow to eventually trust Gamma, is there any way that she gets to see her nephew again? And even if they do, the baby already has a new family. I don’t see them giving the kid up even if Gamma/Mary is his family. Overnight, Gabriel has become a stone-cold badass; the once timid priest is now ready to ‘cut off fingers and pull out teeth’ without thinking twice. But, instead of the scare tactics, they should have Judith be a lead interrogator; she got more information out of Gamma in two minutes just by being polite and conversational. And, for perspective, the show’s been on for ten years, but it’s been much longer in the storyline. It’s amazing anyone remembers the civilized world anymore. That Alpha vs. Daryl fight was brutal, one of my favorite things is to watch Daryl in action. I especially loved the bloody POV angles while they each dealt with their injuries.

A herd is spotted by Alexandria, so Gabriel mounts a defense, Rosita stays behind as she doesn’t trust herself to be effective. Siddiq’s (played by Avi Nash) murder has left her with nightmares about the Whisperers. That night, Beta sneaks into Alexandria through the tunnel; Beta sneaks into the home of the men who originally attacked Lydia (played by Cassady McClincy) and kills him and his friend, then proceeds to the next house and kills the occupants. Just as Gabriel realizes they were tricked into leaving Alexandria, the people murdered rise as walkers and enter the streets. Using the distraction, Beta finds Gamma in her cell, but she defiantly claims she isn’t afraid of him. An Alexandrian distracts Beta and allows Gamma to escape. Judith takes her into a house as Beta kills the woman and follows. Judith shoots Beta and runs with RJ but Beta recovers and grabs Gamma. Rosita appears but he overpowers her. Gamma offers herself to Beta to save Rosita, but they run into Gabriel and the others on the road and Beta is chased off. 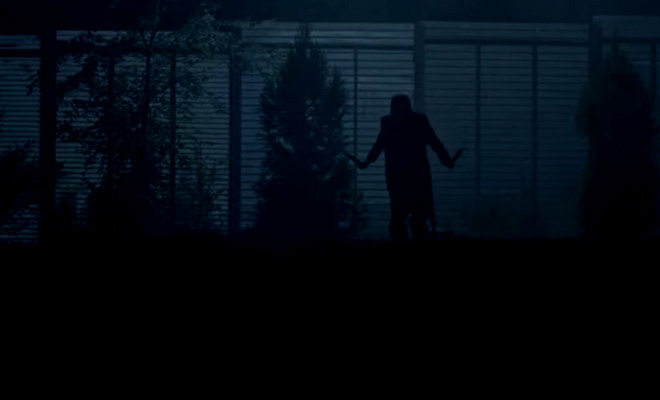 Beta coming to get ya.

It seems the spy Dante (played by Juan Javier Cardenas) was really busy before he got killed, but he gave us the gift of a menacing Beta stalking the streets of Alexandria. I felt like I was watching a scene from Halloween watching the scary masked man go from house to house killing people. But who wasn’t thrilled to see the guys who killed Lydia get what they deserved and right as they were bragging about it? Gamma/Mary has turned from the Whisperers and isn’t turning back, and, while she said otherwise, the girl was terrified of Beta; no rational person wouldn’t be. But she earned points for protecting the children (in another scene almost straight from Halloween) and sacrificed herself for Rosita, who just hours before kicked her ass. I liked seeing Judith getting in on the fight (and the brief reminder that, oh yeah, she has a brother). While I appreciate the symbolism of Rosita’s Whisperer nightmares and her confronting Beta, they were referenced a little too heavily. We get it: she has PTSD. The fight was cathartic in a way, but every scene was basically saying ‘stay tuned for Rosita’s big moment,’ which kind of lessened it.

A bloody and battered Alpha thanks an equally bloody and battered Daryl for making her stronger, but a comment that she didn’t love Lydia enrages her. Lydia shows up and shares a tender moment with Alpha, which gets ruined when Alpha tries to get Lydia to kill her and take her place with the Whisperers. But Lydia tearfully says she isn’t there for them; the Alexandrians aren’t perfect but they’re human and that’s all Lydia ever wanted. Alpha wakes up the next day, Daryl and Lydia are gone, and Lydia leaves a note denouncing Alpha’s ways. Aaron (played by Ross Marquand) returns and tells the others he got separated from the others. Rosita goes to Hilltop for medical help and formerly introduces herself to Mary. Alpha is found by some Whisperers and declares she’s no longer weak and gleefully prepares to kill them all.

For a moment it looked like Lydia was finally having the mother-daughter moment she always wanted with Alpha, but she ruined it with all the ‘kill me’ talk. Alpha must have been somewhat delusional from blood loss as well because why would the Whisperers follow Lydia when they we’re told she’s dead, and they have the brutal Beta ready to take over? Aaron got separated from the others, which means they’ll be a whole episode of drama and craziness to explore how that happened. Lydia couldn’t kill Alpha because, despite all the bad (and there’s a LOT of bad), that’s still her mother. She’ll end up regretting that decision when Alpha releases the horde to happily watch them all get torn apart.

“I’m no longer weak. I’m stronger than ever. Our horde will butcher and consume them. Screams will be song to me.”

Something tells me Alpha is ready to kill Lydia for real now.

“You were dead the moment you came to us.”

Why is it when people think the masked bad guy is down, they take time to look at them? Just get the hell out of there.