Picking up where the midseason finale left off, Michonne (played by Danai Gurira) holds off the walkers and Whisperers dressed as walkers as the group escapes. Meanwhile Negan (played by Jeffrey Dean Morgan) roams Alexandria that night after escaping from his cell. He tries to scale the wall the next morning but Judith (played by Cailey Fleming) stops him at gunpoint.

Negan appeals to Judith that she knows him after all their talks, promising he won’t ever return or hurt anyone. Judith allows him to leave but says there’s nothing out there for him. Alden (played by Callan McAuliffe) volunteers to go out searching and new arrival Luke (played by Dan Fogler) goes since his group is there too. Michonne and Daryl (played by Norman Reedus) take down a group of walkers and Whisperers, they capture a woman (played by Cassady McClincy) and take her back to Hilltop.

While the community mourns the loss of Jesus (played by Tom Payne) and several people look to Tara (played by Alanna Masterson) to take up his position as their leader. The captured Whisperer is locked up with Michonne and Tara ready to question her, but the woman is too hysterical to answer any questions. While Siddiq (played by Avi Nash) patches up Eugene (played by Josh McDermitt), Eugene takes the opportunity to confess his feelings for Rosita (played by Christian Serratos). Rosita runs off and Siddiq finds her outside throwing up; Rosita had a previous fling with Siddiq and is now pregnant. 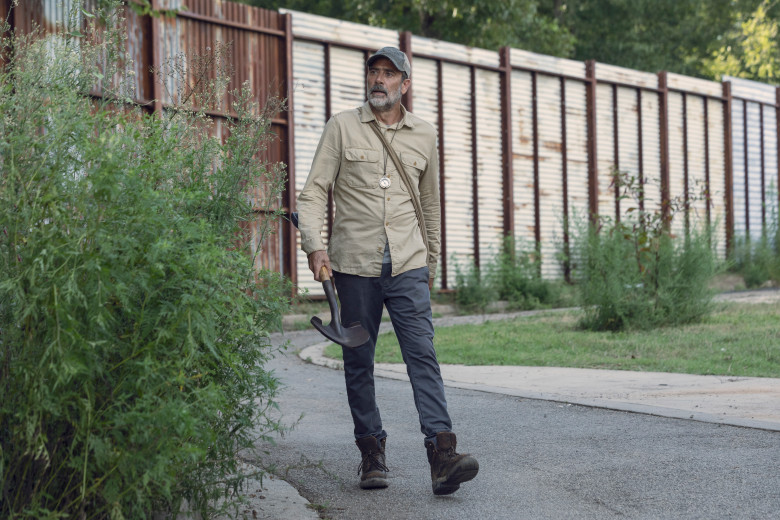 Out for a stroll.

The big introduction of the Whisperers is the focal point of the episode and in that respect it doesn’t disappoint. Walkers have become normalized to these people after all these years and watching them discern walkers from Whisperers makes the walker threat different and scarier. And if provides the perfect narrational catalyst for the scattered communities to band together again. Negan and Judith have a unique relationship and it was almost touching watch them say goodbye, but why would he hang around all night and wait for daylight to escape; it’s just too stupid to buy as plausible.

Negan has been out of the world for years, aside from the wasteland that lies beyond Alexandria, Negan’s only human connection is Judith and it’s clear they’ll meet again. Tara is stepping up to be the leader and it’s good for her character to get some screen time but the same was true for Jesus and he still died…so let’s see how it works for her. Rosita being pregnant doesn’t really add anything to the episode but this mini soap opera could be a nice contrast to all the usual action on the show.

Negan has a few close calls with walkers and wild dogs before he makes it back to the former Sanctuary now in ruins. After walking around and reminiscing at what he lost Negan goes outside and vents his anger by killing walkers. Michonne prepares to head back to Alexandria but tells Daryl he should stay and help Tara run the Hilltop, although reluctant he agrees. Hilltop holds a funeral for Jesus and while everyone mourns the service moves Daryl to anger. He goes to the cell and threatens to kill the woman unless she begins to talk. She protests that walls don’t keep people safe and t heir way works; she says only her mom is left from their group, but Daryl doesn’t believe her and nearly drags her outside to be executed before Henry (played by Matt Lintz) in the next cell talks him down. The woman thanks him and introduces herself as Lydia while Daryl listens to their conversation from a nearby window. 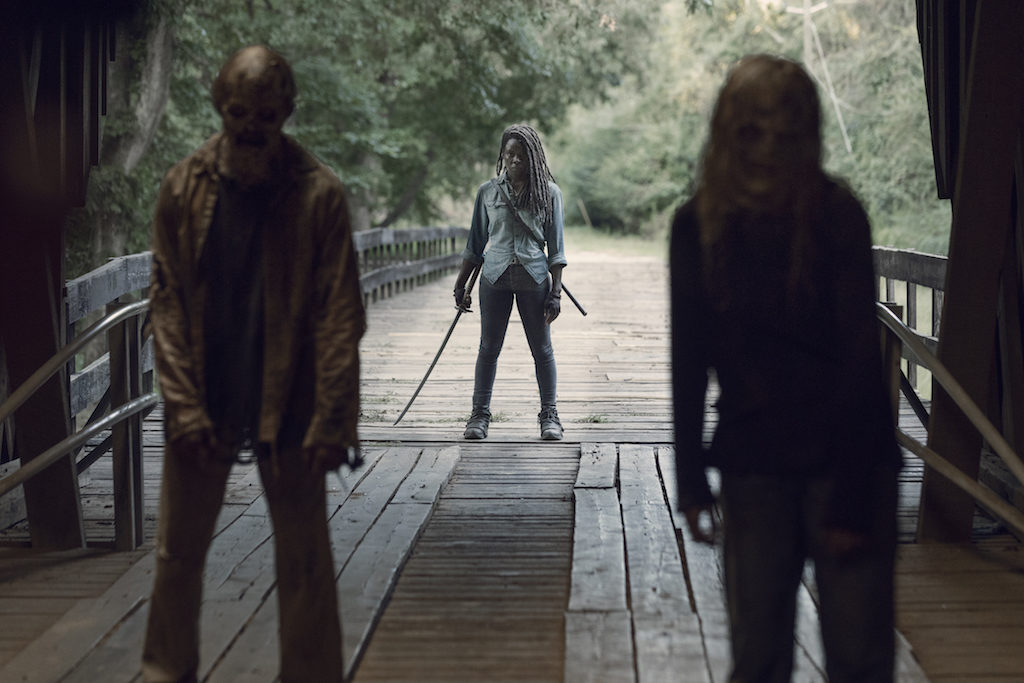 Negan went on what was essentially a goodbye tour of his former life, he’s lost everything and there’s no resurrecting the Saviors since they’re either dead or defected. It’s clear he’s going back to Alexandria eventually, but it was good to finally see Negan out of his cell and actually doing something for a change. Jesus was on the show for years yet his funeral flashed by which was disappointing. I wasn’t expecting a long drawn out ceremony but at least a eulogy or two for what was supposed to be a major character. Daryl takes his role as new leader very seriously though it partly seems out of resentment for being in that position. But his tactic of getting Henry to befriend Lydia and spying on them is genious, Daryl might actually end up the only leader of Hilltop with that kind of ingenuity.

While driving down the road on a motorcycle Judith steps into the road and shoots causing him to crash. Negan returns her compass and says he’ll go back to Alexandria with her having concluded there really is nothing outside for him. Luke and Alden find several arrows in trees and Luke thinks it’s a trail leading to their friends. They follow the arrows and are surrounded by a large group of Whisperers who used the arrows as a trap.

Judith may have a soft spot for Negan but she’s no fool and Negan decided life in a cell with people is better than being alone. He’s clearly getting locked up again but Negan is a compelling character and shouldn’t be sidelined for long. Meanwhile the Whisperers make another dramatic introduction, Alden and Luke are good characters to have be captured. The shock of the moment isn’t lessened and if one or both of them dies…well they aren’t major or much loved characters.

“I told you there was nothing out there.” “You sure as shit did.” “Language! I’m a kid asshole.”

Michonne is going to be pissed at Judith’s choice of friends.

As far as villains go the Whisperers are the most exciting yet, so far anyway.