V series 2009 review, cast info and news.Â  V is a re-imagining of the 1983 miniseries created by Kenneth Johnson, the new series chronicles the arrival on Earth of a technologically advanced alien species who ostensibly come in peace, but actually have sinister motives. 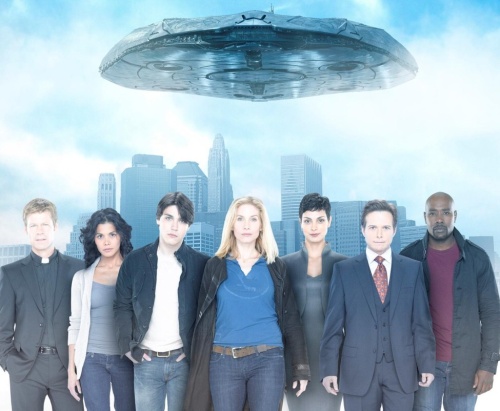 Premise:
One morning the world wakes to find mysterious space ships floating over their heads. Later that day the bottom of the ships turn into video screens and the beautiful leader of the human looking aliens makse a statement saying that they come in peace and bearing gifts. The gifts are health related and technology that we donâ€™t have. One of the humans, an FBI agent to be exact, doesnâ€™t trust the aliens from the start, but when she finds out at a secret meeting that he is an alien himself, she teams up with Ryan (also Alien) to find out what they want and try to stop them from the evil they have planned.

WhatÂ´s Good:
The story line and graphics are great. When the human looking aliens skin is pulled back to reveal their true nature, it is almost morbidly real looking. The character interaction between the Alien leader and the reporter that she has â€˜chosenâ€™ to do their story is a little strange but highly intriguing.

The Not So Good:
This story has been doneâ€¦quite literally in 1983. While the ships and everything else of course have a fresh and more modern look, it is still about aliens with an agenda. Also, the cgi on what is under the aliens skin is so good that if you have a weak stomach then you may not want to watch those parts.

Overall:
This is an interesting show in the science fiction genre. It uses the Earthâ€™s children against us. To those of us who barely remember the first version of V, it was interesting to see the newer, fresher look. It is definitely worth taking a look at if you are even remotely into aliens and conspiracy theories and sleeper cells. There is always a new twist to each new show.