After being trapped by Alpha (played by Samantha Morton) in a cave with her horde of walkers, Daryl (played by Norman Reedus) leads the group from their ledge to another cave using rocks to leapfrog over the walkers.

Alpha believes they knew where to look for the horde because they have spies watching them, unaware her own Gamma (played by Thora Birch) has turned traitor. Daryl chastises Carol (played by Melissa McBride) for running off (and incidentally getting them trapped) and gets her to open up; she doesn’t just want revenge against Alpha, but she needs it to move on from what she lost. Magna (played by Nadia Hilker) looks for an escape route and gets attacked by a Whisperer; her screams draw more but the rest of the group save her. Some get away, and the group follows hoping to find a way out of the cave system. Meanwhile, Negan (played by Jeffery Dean Morgan) floats the idea by Alpha that Gamma has turned traitor based on his own experience of having people betray him when he used to rule the Saviors. Alpha seems to take the idea into consideration but threatens to castrate Negan if he spreads the idea and causes paranoia. 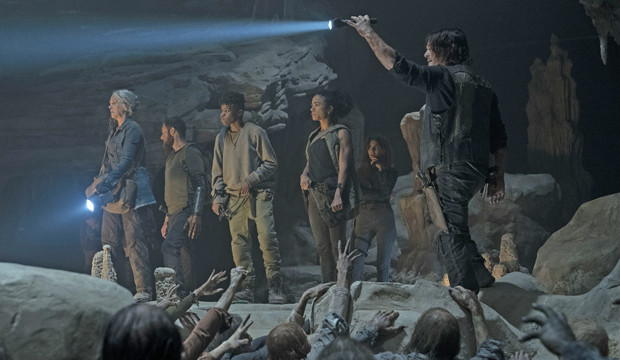 Spelunking has never been so scary.

The underground cave makes for a great location for a great escape; it’s dark and creepy which is what keeps the show fun to watch after all these years. And, of course, there’s enough favorite or recognizable characters in the group that you want them all (or at least most) to make it out. Which, let’s be honest, in a show that has so many characters, some you could care less what happens to them. Daryl thinks Carol’s need for revenge is ‘understandable,’ but after everything she’s been through it’s a miracle that she’s still able to function in any way. At least killing Alpha is a way to get some form of justice. Negan is turning out to be an asset for Alpha, he’s like the Palpatine to her Vader (of course that didn’t end well). And, like a boss, instead of a ‘thank you,’ she threatened to cut off his balls and knocked him into the Whisperer’s bathroom pit.

Daryl leads the group through a series of small caverns, Carol’s claustrophobia overwhelms her, but Daryl manages to calm her down. Jerry (played by Cooper Andrews) hears noises and notices walkers crawling after them. He gets stuck, but the group gets him out before he suffers any bites. Unfortunately, they find themselves on a ledge facing a cavern with the horde right below them. Alpha learns that Gamma hasn’t been seen in a while so she orders Beta (played by Ryan Hurst) to find her and bring her back so Alpha can deal with her if she proves to be a traitor. She then leads Negan away from the group and forces him to strip, he thinks she’s about to kill him but is surprised to find her naked as well (but with her walker skin mask still on). Alpha decides to reward Negan for revealing Gamma as a spy in a way she thinks he’ll appreciate, and he gladly accepts. Daryl manages to break through above ground, but as everyone makes their way out he notices Carol is gone. 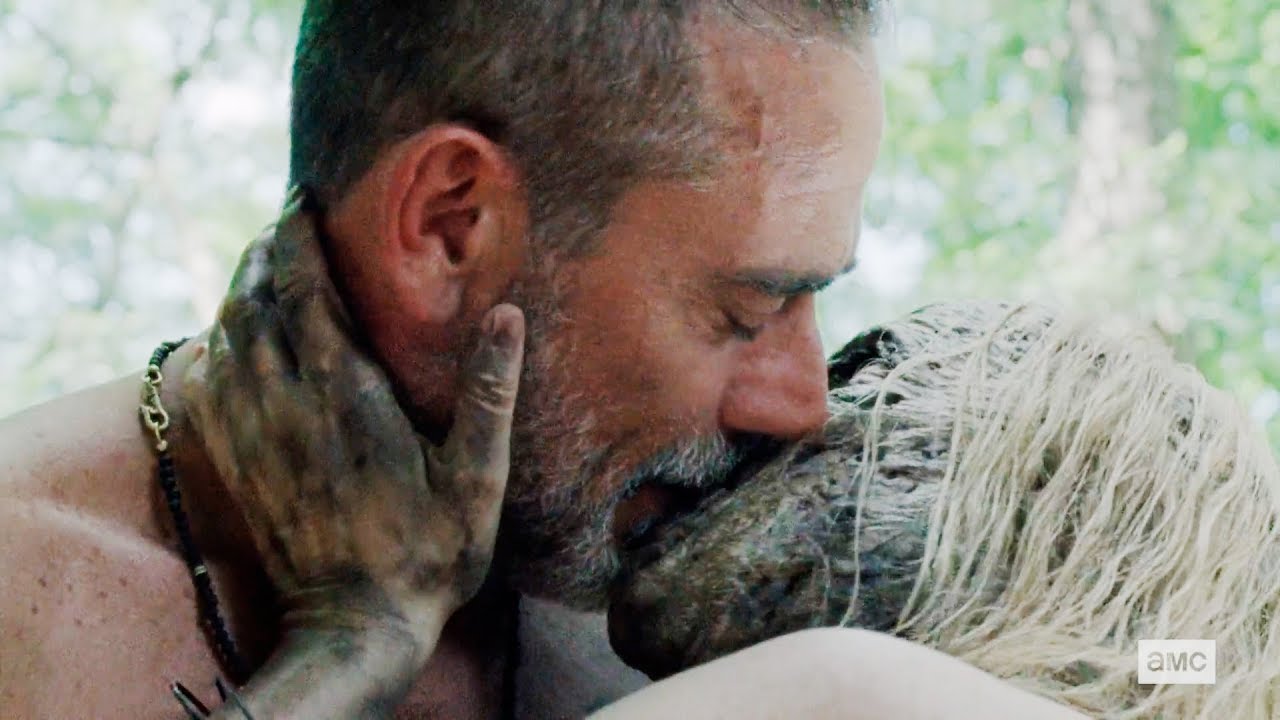 That whole scene of everyone crawling through the caves was great, being in that tight of a space and the fear of getting stuck is enough to freak anyone out. The walker attack was a nice touch although the whole time Jerry was stuck, I found myself thinking ‘would I miss him if he died?’ He does have some funny one-liner sometimes, but, overall, I wouldn’t have been too upset since that kind of tertiary character is usually the ones who die in these situations—but he survived for now. I love watching the relationship between Alpha and Negan evolve and honestly that Alpha likes to wear her mask during sex isn’t much of a shock. That Negan was so into it even when he was basically covered in feces, however, is a whole other story. But they can be a lethal power couple assuming Beta doesn’t kill Negan first. I don’t think Beta would be jealous that Alpha is attracted to Negan (but who knows really), more that his position as her number two would be threatened.

Carol has taken a stick of unstable dynamite the group found in hopes of destroying the horde, but Daryl stops her. She breaks down in his arms but before they can leave the dynamite falls and causes a cave in. They get back to the group and escape, but the rest of the dynamite goes off with Magna and Connie (played by Lauren Ridloff) still inside. Daryl is distraught but orders the others to go back while he stays behind to find another way in and save them if they’re still alive. Carol feels very guilty that her actions caused them to be left behind and begs Daryl to let her have it, but he gives her a cold silence.

Carol and Daryl have been one of the closest relationships on the show but now that she’s potentially killed his potential girlfriend there’s a rift there. Carol only went back to blow up the walkers as a form of revenge against Alpha, which just adds fuel to the fire since they just had a conversation about her running off halfcocked. But while Carol and Daryl’s relationship might be on the rocks Connie should be fine. It’s taken ten seasons for Daryl to get a potential love interest; they’re not going to kill her off before they even get together.

‘Go ahead and say it to me…you cared about her and now she’s gone because of me. Please just say it.’

How the hell does Alpha get those walkers in and out of that cave?

Carol usually manages to bounce back but I think she’s had one tragedy too many.