(Since we just finished going over every published Fazbear Frights book, and some of you might need something to read, I figured I’d bring back around my review of this excellent science fiction series. – Brandon Scott) 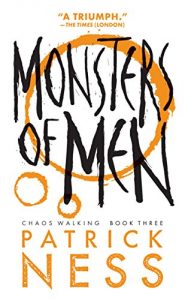 Having now read the entire Chaos Walking trilogy (except the short stories), I figured I’d continue THIS ARTICLE, and discuss new themes and plot machinations. The third book does a lot to change the series, and covering the end game plays, for those who are still on the fence about reading the books, will be illuminating.

This is for a big reason: the first book does not reveal the series’ hand. The first book serves to reveal enough background and world information for the stakes of the third book to mean something. But a lot of what happens is not perhaps what one might expect given that initial plot. It’s a bold show of skill that Patrick made an engaging story that so easily dovetails into such a scope while maintaining aspects of its core themes and applies them to broader targets.

I’ve beaten around the bush enough: what’s Chaos Walking about as a whole? What’s the function of the story? Well, far be it from me to claim a sweeping and yet absolute understanding of a book series I’ve only read once, but I would make these assertions:

I’ll take each in stride, though avoiding any real spoilers. This is so, if these topics strike your fancy, then you can just go read the books. They’re solid—if rather violent and disturbing—science fiction action novels, with a hint of romance and political commentary. 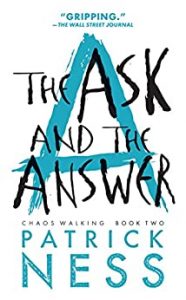 For those still here, though, let’s dig deeper. The biggest topic was first for a reason. It turns out Chaos Walking was a war story. The books go over several skirmishes and assaults, and the body counts are intense. Death occurs so often and in such high volume you must wonder how the remaining population even exists. But the books deal with even heavier topics of war if you can believe it. Systematic slaughter, inhuman and demeaning acts of cruelty, grievous wounds, and torture come up with shocking regularity. A more politically skewed (and historically knowledgeable) reviewer than I would likely spot many allusions this series is drawing from for some of these moments. It’s presented so teenage audiences can probably handle most of it, but still have it make an impression on them. However, fair warning, if you think the shocking things in the first book were too much, then don’t even try to read the later ones.

Next up for discussion, we get into the echoing of cruelty and the momentum of vengeance. Violence begetting violence is presented with a Cold War-style mentality. They contend with a logistic exploration of weapons on higher scales, not just the moralistic avenues arguing their deployment. A lot of the series talks about what is forgivable, and who can be blamed for an act of violence—and what can be done to solve it. I’m not sure I like how they resolve this plot point and thematic question, especially with how The Mayor is treated (it feels like a cop-out). If it does spark discussion amongst readers, though, it will at least serve as a good starting point for nuanced debate.

And, finally, this brings us to the last big theme I noticed: abuse and toxic people. The ideas are blown up into murderers and mind-control, but the bottom layer is solid enough. The connection between Todd and The Mayor is such a twisted and interesting one, full of creepy and concerning moments, that it’s almost a relief when it finally morphs into its resolving version. The eventual culmination of the conflict, the way it’s handled, is a little cliché—if you’ve read enough of these sorts of books—but it’s given depth and thought, if only in its theming. YA villains are almost always a little disappointing in their ending scenes, but this is relatively fine. 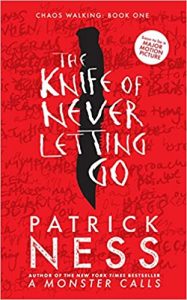 Over 1500 Pages of Excellent Writing Excuses A Somewhat Meh Resolution

Which naturally leads me to some final thoughts. Specifically, the ending. It’s, well, it’s not a great ending, frankly. I won’t spoil it, and I do understand why it was chosen. There are aspects of it powerful, thematically elucidating, but the final pages after it’s done its job are disappointing, considering how the series has treated similar moments prior. I’m dancing around spoiling it, but if you read the ending and feel somewhat deflated, that’s possibly why.

But despite what criticisms I’ve levied, I recommend the series. It does more than the usual steps of dystopian literature. It’s got a lot of heady topics explored enough for those just coming upon them. Those that want a series that’s got a good amount of meat on its bones, both in mental stimulation and sheer page count, could do a lot worse. I’d place it between The Hunger Games and Scythe in terms of a strong understanding of YA conventions and exploration of what violence does in a culture. Sometimes we need a book to get us thinking, and The Chaos Walking trilogy will give you just that.