While reading a message painted on a tree, Alicia (played by Alycia Debnam-Carey) is nearly killed by walkers after freezing up when they attack but is saved by Strand (played by Colman Domingo). She hasn’t killed anyone or anything since the group reunited and is having trouble bringing herself to do so again.

While searching for the person painting the trees they are contacted on the radio by Wes (played by Colby Hollman) who was previously accosted by Logan (played by Matt Frewer) and asks for a ride to meet his brother. Once they drop off Wes, they hear shouts and gunfire inside, a man runs out and steals their truck. They shoot at him but only end up drawing more walkers which force them inside. Strand’s vision is compromised from tear gas he fired at the walkers thinking it was a regular gun. Wes claims he has no brother and only wanted Alicia and Strand to help him attack the man because he stole something from him. Althea (played by Maggie Grace) and Morgan (played by Lennie James) break into a bank so Althea can store her tapes in the vault. They get a message from Alicia explaining their situation and asking they find the man because he’s wounded. But along the way they get stopped by Logan and his crew who demands to know where the oil fields are in exchange for letting them pass to help the man. 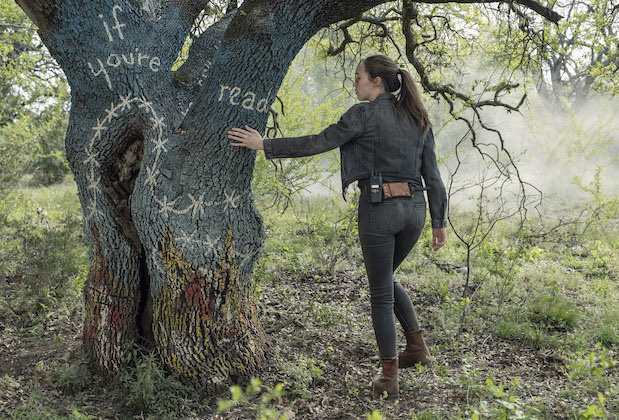 Althea picked a great hiding place; a bank is the last place people will go raiding (unless they want to roll around in the money and pretend they’re rich for a few minutes). Logan isn’t much of a villain he’s more like a bully who talks a big game but doesn’t do anything. His group will shoot a man’s motorcycle to bits but not Morgan or Althea? They didn’t even look scared just annoyed at the inconvenience I want real menacing villains. Wes went from an innocent bystander to someone dangerous, arguably more dangerous than Logan. What’s funny is if he’d told Alicia and Strand the truth, they probably still would have helped him just without shooting anyone, but this guy clearly wanted revenge. Also, Alicia having PTSD and not wanting to kill is understandable but how does that extend to walkers? It makes no sense to me and only seems included to add more suspense to the action scenes.

Morgan asks what Logan wants with the gas, but he only says it’s bigger than what they’re doing. Althea and Morgan refuse to give up the location and decide to backtrack, but Morgan nearly kills Logan when he makes a comment about his wife and son. Wes doesn’t elaborate on what the man stole but Alicia deduces it has something to do with his brother, but Wes coldly states it’s the way the world is now; you shoot, and you kill. Alicia can tell Wes never killed anyone before and tries to appeal to him to save the man. Wes develops a change of heart and goes out to shoot the walkers, one breaks in, but Alicia still can’t kill it, forcing a half-blind Strand to save her again. They escape with Wes and find the man walking along the road, he attacks Wes who stabs him. The item he stole was a manuscript; he just wanted to finish reading it and didn’t know it belonged to Wes; he dies after saying it was good and Wes walks off coldly telling Alicia to keep it. 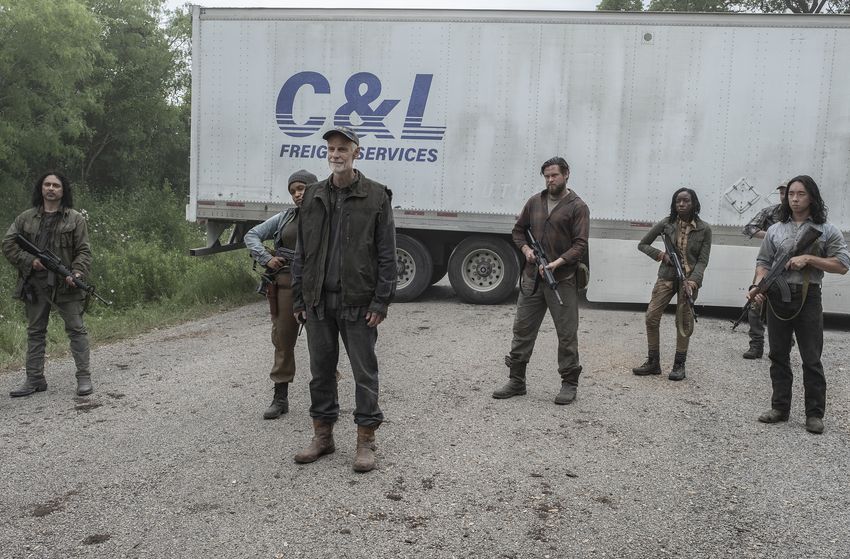 Logan has a super important reason for needing the gas but won’t spill the beans, they’re clearly up to no good. It better be something crazy because right now Logan’s entire story is going nowhere. Wes is the jaded survivor who seemingly has no issue killing and Alicia is trying to reform from too much killing; clearly, she’s supposed to help him right? When Wes had that abrupt change of heart it felt rushed and unearned, so I was oddly happy to see it was all a ruse and he ended up killing the man. That man died simply because he wanted reading material as he wandered through a wasteland of the dead alone. If Wes had just talked instead of gone in shooting things could have turned out very differently. Apparently, that was his first kill and if that’s true Wes has a knack for it, maybe that can be the subject of his second book.

Althea and Morgan bury the man while Alicia skims the manuscript and sees Wes wrote it for his brother. The last page also contains the message written on the trees which inspires Alicia to write her own message on a tree. She manages to kill a walker and leaves one of Morgan’s quotes ‘no one’s gone until their gone’ on the tree. Morgan confesses to Althea that he’s been thinking about his family and that’s he’s worried about losing the good memories to the bad; Althea encourages him to talk about them on camera so that doesn’t happen. Meanwhile, Logan and his group break into the bank and take Althea’s tapes hoping for a clue to where the gas is stored.

Well if nothing else at least Alicia seems to be reverting to her former badass self, so a little good came out of all that. Althea’s suggestion of recording Morgan’s memories is a great one but you can’t help feel anytime an interview is mentioned it’s a calculated move on her part. The girl loves a good story, but she loves it more if it’s on camera for the world (or what’s left of it) to see. You know the second she finds out Logan stole her tapes Althea will want to go to war. Whatever kick starts the fighting between the two groups works for me there’s been more than enough build-up.

“At the end of the day, people are people. And they’re just going to leave you wanting more.”

It’s tragic that man died never finishing the book, never knowing how a book ended would be torture for me.

“Don’t you guys have bigger fish to fry?’

So far the video they shot has just created more problems for them.