Morgan (played by Lennie James) and Althea (played by Maggie Grace) catch a man, Tom stealing their gas, but they’re all forced to hide from some of Virginia’s (played by Colby Menifie) men on horseback tracking him.

Althea interviews Tom and learns he lived in an apartment complex with his sister and others when Virginia’s group showed up. They offered to help as their supplies began running out, but as leader Tom was blamed for the problems and he was forced to run. Althea decides to sneak into the complex to rescue Tom’s sister that night, Morgan confronts Althea about what she’s up to and she counters with why he doesn’t want to go back to the convoy which ends the conversation. Meanwhile Grace (played by Karen David) and Daniel (played by Ruben Blades) are scavenging when they hear about the oil fields being taken but car trouble leaves them stranded. Using a walker as a distraction for the guard, Althea and Morgan get into the complex and see their oil tanker. Althea admits that she believes Virginia’s group is an extension of who Isabelle (played by Sydney Lemmon) was working with and hopes to find her. 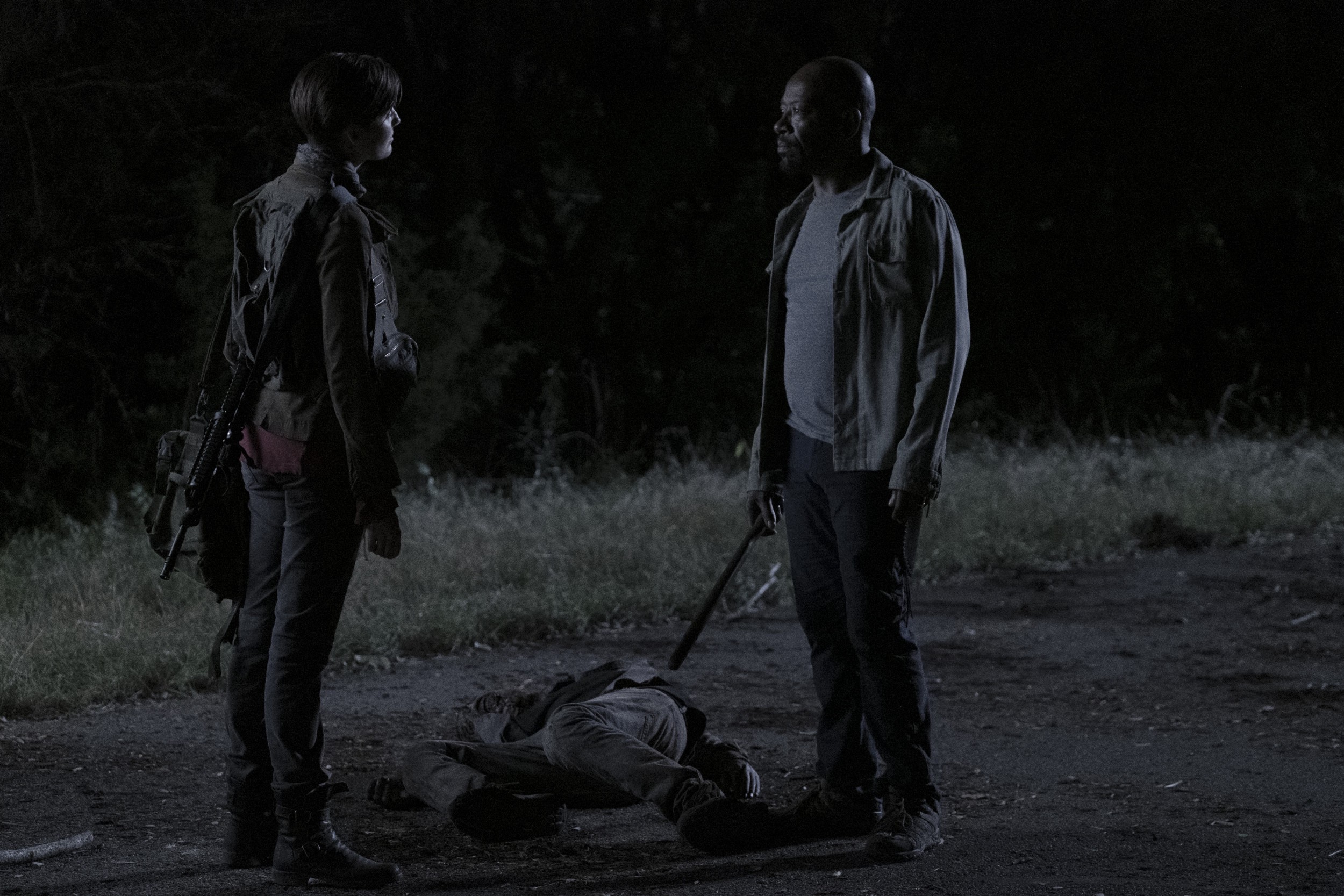 What you really up to?

In just one episode Virginia and her men have become more entertaining than Logan (played by Matt Frewer) ever was, I’m so glad they killed them to make room for dynamic characters and a better storyline. They are helping people but it’s on their terms so whatever ‘better world’ they want to build it’s clearly one where they are in charge. There’s no way that Isabelle is part of Virginia’s crew; they ride horses and seem less organized than Isabelle was; she was practically militaristic. While an Althea/Isabelle reunion would be great to see it won’t be this easy or convenient. However, that conversation also jump started Morgan coming to terms with his feelings for Grace; and considering she’s likely dying of radiation poisoning the sooner the better.

Althea breaks into a room and finds maps and information about places the group have taken and records it. Morgan finds Tom’s sister’s apartment but only finds a walker implying she killed him and ran. He throws the walker off the balcony and it almost gets Althea in the pool, Morgan saves her but unfortunately, they get caught by Virginia. The next day Virginia reveals she knows who they are and that everyone is fine; she just wants to help people like they do. Althea tentatively asks if they have access to helicopters, but Virginia has no idea what she’s talking about which means Isabelle has no part of their group.  Morgan admonishes Virginia’s approach, but she tells them this is the future and they should join. Althea and Morgan are allowed to leave with all their supplies and weapons; Morgan’s fighting stick is even updated for him. 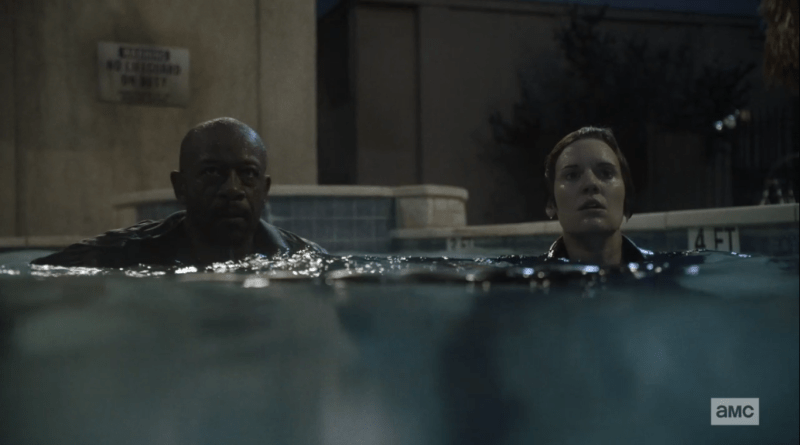 Going for a midnight swim.

I can’t believe Althea and Morgan didn’t get caught right away; throwing bodies off balcony’s and splashing in the pool. Lucky for them Virginia decided to roll out the welcome mat instead of assembling a firing squad. They even got to leave without any issues but the obvious threat behind her invitation sours her hospitality. I figured Isabelle wouldn’t be making an appearance but it’s only a question of whether it happens in the next few episodes or next season. It’s a toss up whether Virginia will stick around but I hope she does because she’s a fantastic villain. It would be a shame if she’s killed off by the finale and we wasted most of the season following Logan’s flat storyline.

Grace and Daniel find shelter from walkers that night, but he loses records he had collected. The next day he admits he wanted the records to give to Charlie (played by Alexa Nisenson) who he views as a daughter figure and wanted to leave her something. Grace feels dejected that she couldn’t help Morgan, but Daniel tells her he saw how deep their connection is. Althea and Morgan go back to meet the others with Tom, on the way Morgan gets Althea to open up about Isabelle. Morgan decides to reach out to Grace to tell her how he feels but Daniel calls on the radio to say Grace is sick. Worried radiation poisoning might finally be killing her, Morgan is determined to get to Grace.

We already knew about the father/daughter relationship between Daniel and Charlie, but it gets Grace to admit her feelings about Morgan. But of course, right when they want to admit it Grace gets sick, and while she’s a great character and I like their budding romance it might be her time to go. Alicia’s (played by Alycia Debnam-Carey) exposure to radiation hasn’t been brought up again (no big surprise) but they can’t wipe the slate clean for Grace too. It’s notable there hasn’t been a major character death this season unless you count Logan (I don’t). Fear killed 5 main characters in season three alone and a death is overdue. Honestly with everything these people face there needs to be a death or two so all the surrounding danger hits home.

I bet Grace wishes she had gotten checked out at that Urgent Care now.

“We can make it on foot.” “You, me, and a cat with serious behavioral issues.”

When the day comes that Althea runs out of tapes she’s going to lose her mind.