Alicia (played by Alycia Debnam-Carey) cuts through walkers searching for Annie (played by Bailey Gavulic), Dylan (played by Cooper Dodson), and Max (played by Ethan Suess), and Dylan finds her and brings her to their camp. Meanwhile, Strand (played by Colman Domingo) and Charlie (played by Alexa Nisenson) try to stay one step ahead of the radioactive walkers, using the sails of the hot air balloon as a barrier.

Alicia admits to Annie that she wants to save them to make up for the bad things in her past but says it isn’t safe to stay; Annie still refuses to leave. Alicia radios Morgan (played by Lennie James) lamenting he should have been the one, but he convinces Alicia she has what it takes. Althea (played by Maggie Grace) discovers a hole in the plane’s fuel tank, the tank is nearly empty, but Althea knows where to find more; the fuel stop she went to with Isabelle (played by Sydney Lemmon) but keeps that to herself. John (played by Garrett Dillahunt) wants to get back to the plane but Dwight (played by Austin Amelio) won’t leave without Sherry; John can’t bring himself to show him Sherry’s letter saying to stop looking and stays to help. Morgan finds a car and takes out the walkers surrounding Strand and Charlie to get them and the propellers back to the group. Annie and Max are attacked by walkers in their roadblock that break free and follow them back to the camp. 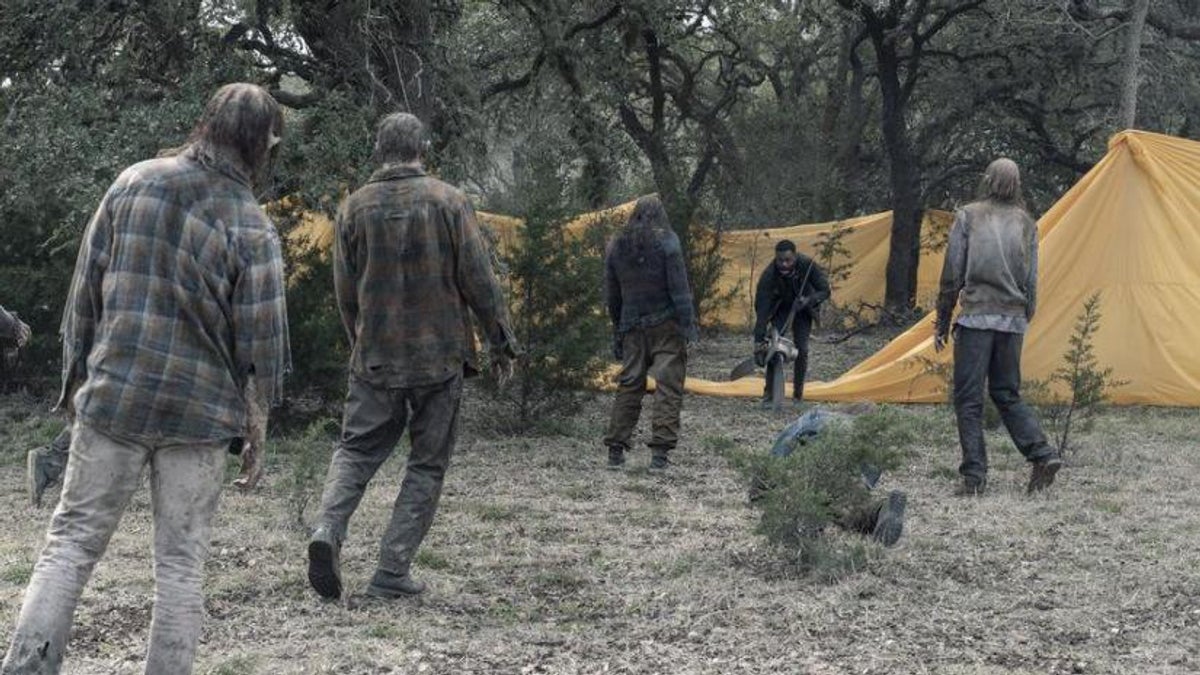 Pretty much any problem the group could run into happened and there will surely be more. Alicia and Annie are similar people in that they’re both stubborn but, in the end, Alicia is going to win out due to the luck(?) of the walkers breaking free. The kids don’t seem to mind the risk of radiation but raging walkers will get them moving. I do think some or most of them will die since Annie, Dylan and Max are the only ones who have been given names (I don’t the others have even had lines). Dwight, on the other hand, refuses to leave without his wife and John is basically enabling him. Unless Sherry makes a surprise appearance it doesn’t look likely that Dwight will be getting a happy reunion. Honestly, if Dwight wasn’t such an established character from the original series, I wouldn’t care at all, but since he’s a well-known character I would prefer he sticks around.

Grace (played by Karen David) tells Morgan the generator has given out and they have 12 hours to a day before the reactor melts down. Although she tells Morgan she’ll meet him at the truck stop, he knows she’s lying and takes a hazmat suit to bring her back himself. After hearing June talking about John, Althea is unable to keep what happened with Isabelle to herself any longer, but only talks about their intense attraction but not what Isabelle was up to. Althea is upset that she’ll never see her again, but June tells her if she never saw John again, she would still be grateful for what they had. At the camp, Alicia holds off the walkers as they start breaking through the fence while the kids run. Out of fuel and running short on time, John shows Dwight the letter Sherry wrote and a despondent Dwight walks off. While fighting the walkers, Alicia kills one with radiation burns and gets its blood on her, possibly risking contamination but manages to convince Annie to take the kids to the plane. 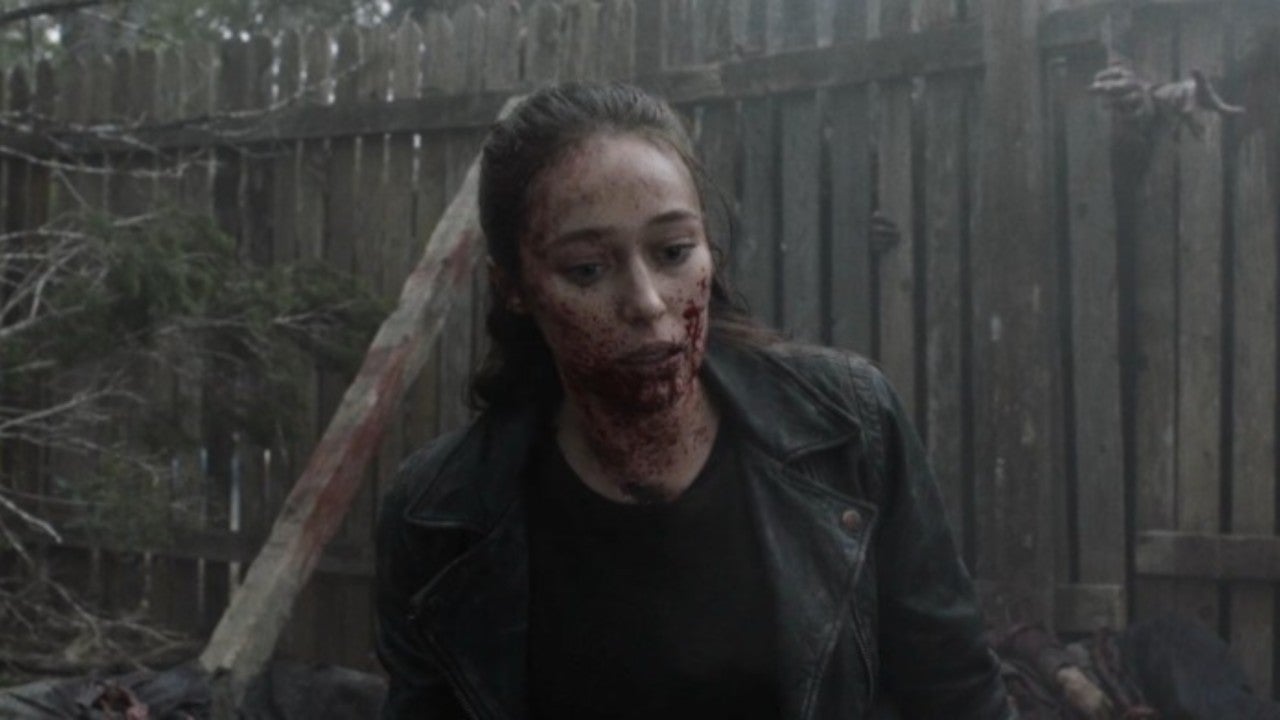 Althea may have found true love and like John was for Dwight, June is the champion for that romance. A big difference is, narrative-wise, Althea is going to meet with Isabelle again simply because whatever her group is doing is too interesting not to follow up on. Dwight is devastated but the real problem is where he goes from here and if his character can grow beyond his search. Grace is determined to go out with a bang, but Morgan can be convincing. Of course, at this point, several people probably have radiation poisoning as well. Grace brings it up a few times that Morgan exposed himself, but he shrugs it off and Strand and Charlie landed in a contaminated area. Alicia has clearly been exposed but she’s such a major character that it’ll probably get shrugged off and she’ll be fine like everyone else will be fine. However, if Alicia’s contamination grows into a real problem at least she’ll die knowing it saved all those kids.

Morgan convinces Grace that dying or not, she’s still alive and she doesn’t have to sacrifice herself. Dwight decides he won’t stop looking for Sherry despite her letter but wants to help John get back to June. Annie and the kids arrive at the truck stop without Alicia who is seen wandering through the woods with a group of walkers trailing her. She loses them but doesn’t mention her exposure when Morgan calls asking if she’s ok. The episode ends with an alarm sounding signaling the start of the reactor’s meltdown.

I think Grace wanted to live more than she let on; Morgan didn’t have to try hard to get her to come with him. Dwight seems like he’s ready to stay behind to keep looking and it’d be a shame to lose his character that way. Alicia is rightly scared that she’s been fatally exposed but I’m willing to bet such a popular character won’t get killed off like that.

“You haven’t killed any walkers with burns on them, have you?” “No, but we’re currently enjoying a leisurely stroll with some of them.”

The group has gotten pretty large, if there turns out not to be enough room on the plane are they going to tell Annie and the rest they should stay after all?

“We’re going to do what we came here to do.”

Bright side; the reactor is going to blow but the siren should distract the walkers and make escaping easier (but we all know that won’t happen).