Morgan (played by Lennie James) and the rest of the group bring a damaged plane back to the truck stop. They convince Annie (played by Bailey Gavulic), her brothers Dylan (played by Cooper Dodson) Max (played by Ethan Suess), and the other children they can fix it and leave together. He also tries to reach Grace (played by Karen David) on the radio but she ignores his calls.

They reach out to Strand (played by Colman Domingo) for advice fixing a part as they also work on their own plane. Annie still wants to remain when the group leaves and June (played by Jenna Elfman) tries to coax her into thinking otherwise. Meanwhile, John (played by Garret Dillahunt) and Dwight (played by Austin Amelio) continue searching for Dwight’s wife Sherry. Although Dwight is growing less hopeful about finding her, John reminds him that he faced bad odds finding June. They get the plane working but the propeller breaks apart. While wondering where to get a replacement, Grace radios and asks for a generator to stop another meltdown at the plant. Grace warns that even if her plan works it will only buy time and they need to leave fast. 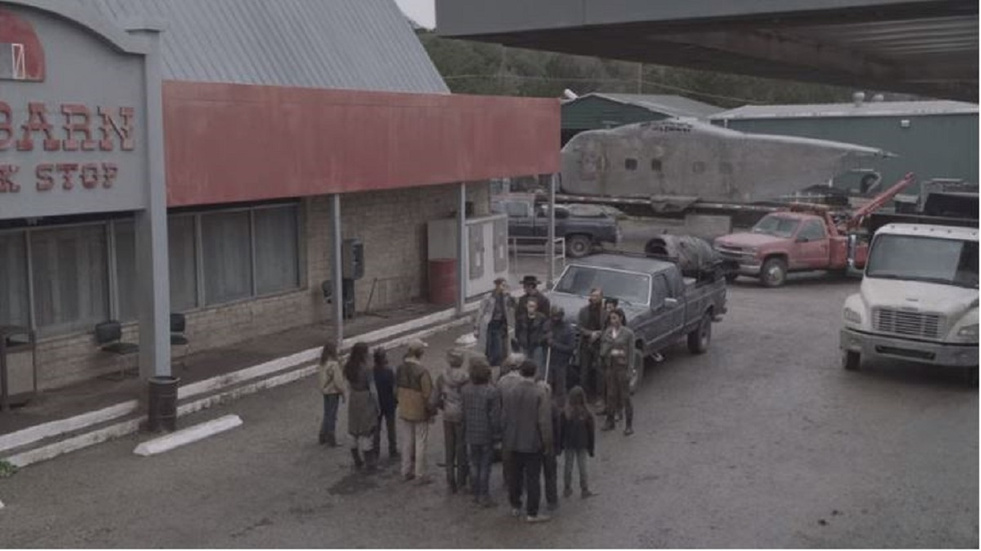 Let’s all work together!

Annie is really sticking to her guns but let’s be real these kids aren’t going anywhere. We wouldn’t have spent all this time getting to know them if they were all going to run off to wherever and never been seen again. John’s optimism is great, but it took him a few weeks or maybe months to find June. Dwight has been separated from Sherry for years now and has only had scraps to go on in terms of clues, but narratively speaking there must be a conclusion. The plant melting down puts the familiar ‘ticking clock’ scenario on the group’s escape, it’s a frequently used plot but a good one. It makes things more exciting and moves the story along; not very compelling to watch them be stranded for an entire season.

Annie is determined to leave after hearing about the plant meltdown. Alicia (played by Alycia Debnam-Carey) questions why Annie wants to leave, she remembers how walkers with radiation came to their camp. Annie led the kids away to safety and recounts waiting days for their parents before she went back and found the parents dying of radiation poisoning. Annie’s parents dying wish was to take care of her brothers and Alicia says Annie can do that with them but gives her car keys to use if she wants them. John finds a clue from Sherry in a diner and Dwight realizes he’s been searching in the wrong place. They follow the clue and John finds a note in a car where Sherry pleads with Dwight not to kill himself trying to find her and states she won’t leave any more clues for him. Grace goes off alone to stop the reactor and ignores Morgan’s pleas that she doesn’t have to do it alone and has a future with them. 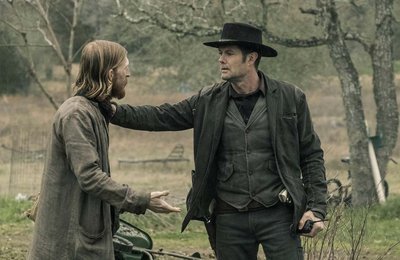 Never give up hope.

Annie’s story is a sad one and really shows more of who she is as a person, which to me says we’re supposed to like her because she’ll be around for a while. It’s baffling that Annie would feel safer near a faulty power plant and walkers with radiation. Grace on the hand seems to be heading for a heroic death to save everyone. Morgan wants to save her but not only is a heroic death a good way to go out but it’s a good lesson for Morgan that not everyone can be saved. It’s a lesson Dwight may have to learn soon; the obvious solution is that he’ll find Sherry but again not everyone can get a happy ending. John looked heartbroken when he read that letter, but Dwight may actually be crushed. Even worse I don’t know what story can be crafted for his character since his search for Sherry has been the main one from the original series to here.

Strand radios to tell them they have propellers and are bringing them to the group; they look up to see Strand and Charlie (played by Alexa Nisenson) in a hot air balloon. Alicia goes to tell the kids but they’re gone; she wants to find them and Morgan tells her to hurry because Grace can only buy them a little time. John is unable to tell Dwight about the note after seeing how optimistic Dwight is now. Strand and Charlie run out of fuel and must land far from the camp. Morgan sends out a warning about the radiation walkers and goes out to find them, but, unfortunately, they’re surrounded by many contaminated walkers.

Watching John lie to Dwight was like when a parent lies about Santa and Dwight will be twice as crushed when he learns the truth. Strand is the type of person to make a grand entrance, but it got a little marred by not checking their fuel. But all these search and rescue storylines are great drama for the penultimate episode to the midseason finale. And there are plenty of other story threads to pick up after they escape, although, if it were me, I’d be half-expecting to die from cancer after all that exposure.

“As impossible as this all seems, we can do this.”

It’d be super awkward if Dwight found Sherry and she ended up moving on with someone else.

Lets hope the second time flying a plane they can stick the landing.