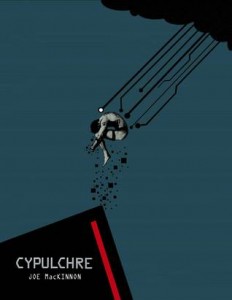 It takes a great writer to describe a complex world created with technology beyond our time, even if just, and phrases that haven’t entered our dialogue quite yet and allow readers to feel as if they’re a part of it and not alienated. At first Joseph MacKinnon’s novel Cypulchre is a bit intense. There’s a lot of science jargon and the story is told mostly through dialogue which takes some getting used to, but you r’e quickly engrossed in the dark plot.

Dr. Paul Sheffield is a neuroscientist who works against his own demons to excel in his field and creates the CLOUD. It’s a virtual reality-type state wherein a person can upload their consciousness and enjoy, and then enter their physical body once more. Paul is banished from his work and refuses to live on the grid, or rather in the CLOUD, where he believes he can be tracked. In a world riddled with technology, Paul is trying to stay hidden, until he realizes the CLOUD threatens the life of those synced to it, including his family. It’s a thrill ride featuring a dream cast of characters, which could be more fleshed out, and MacKinnon writes in a manner that freaks you out and confuses you in the best way possible.

As my introduction to cyberpunk, I could not be more pleased. The book offers a helpful glossary to keep your focus in this dystopian future and there’s just enough action to keep you guessing. Each chapter acted as a new discovery, and offered an insightful look into what a future where tech heads run rampant could look like. I would have liked to see more of the world of the CLOUD, because it sounded wonderful and terrifying, but if MacKinnon were to describe it in a way where the reader was a witness it would have been magical.

This twisted cyberpunk thriller is MacKinnon’s second novel, succeeding the controversial Faultline 49 which he published under the name David Danson. It’s published by Guy Faux Books and it available right here on Amazon, and other online book dealers.